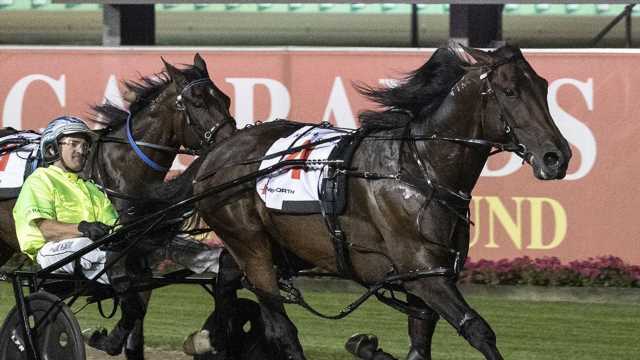 Australia’s top pacer King Of Swing will be a surprise absentee from Albion Park on Saturday night, but there’s no need to panic.

Anticipation was enormous for King Of Swing’s clash with stars like Copy That, Spankem, Colt Thirty One and Turn It Up in the Wondais Mate Open Pace.

“There’s no issue, nothing to worry about, we just changed plans,” driver and co-trainer Luke McCarthy said.

“This week was a 1660m sprint and it would be a two-week break from this to the Sunshine Sprint. We’d prefer to run him the week before a Group 1 race, his record doing that is outstanding.

“There’s a 2138m free-for-all next week (July 10) so he’ll go there and then run the next two weeks (in the Sunshine Sprint and Blacks A Fake).

“He very fit, he’s had the two runs back, so it’s a matter of topping him off and running next week fits better.”

King Of Swing’s absence is great news to connections of key rivals, most notably one of NZ’s best pacers Copy That, who opens his Queensland campaign in the Wondais Mate this week.

Just who drives some of the key players during the TAB Constellations in coming weeks is a looming headache with growing COVID-19 concerns and border restrictions.

Will Anthony Butt be able to get up from Melbourne (and back when he needs to) to drive Copy That over the next three Saturday nights?

Top Kiwi driver Blair Orange has the drive on stunning Redcliffe Derby winner Krug in Saturday week’s Group 1 The Rising Sun, but NZ has suspended the travel bubble with Australia.

“It’s anyone’s guess at the moment, the driving situation,” Krug’s trainer Cran Dalgety said. “We’ve got a bit of time on our side and the drive is Blair’s if he wants it and can take it.”

Originally published asChange of plans for King Of Swing