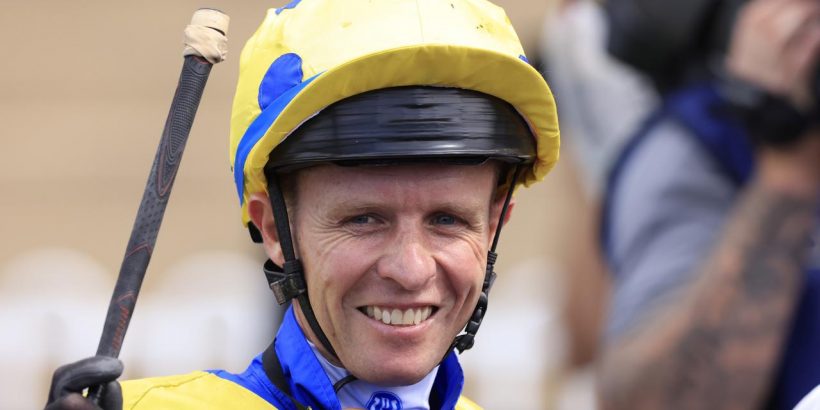 Angel Of Truth is backing up after his game effort to finish third behind superstars Verry Elleegant and Addeybb over 2000m last week.

McEvoy believes a repeat of that effort will secure the Team Hawkes-trained Angel Of Truth a second Group 1 win in the $1.5 million Kia Tancred Stakes (2400m).

Angel Of Truth’s Derby success came seven days after he had won the Tulloch Stakes (2000m) and the Hawkes stable is following the same race blueprint to have the gelding at his peak for the Tancred Stakes.

McEvoy said Angel Of Truth will enjoy getting out to 2400m again – and not having to compete against Verry Elleegant and Addeybb.

“Angel of Truth put up a great run last week and wasn’t far behind those two star horses,’’ McEvoy said.

“He really fought back hard and at the furlong (200m) I thought, are they going to get me? At the finish, they were just too good for him on the day.

“But it was a great effort and I’m expecting a similar run in the Tancred.”

Angel Of Truth is on the third line of Tancred betting at $8.50 behind Cox Plate winner Sir Dragonet at $5 with Kiwi champ, 14-time Group 1 winner Melody Belle at $6.

The Rosehill track surface was back in the good range yesterday which McEvoy maintains won’t be an issue for Angel Of Truth.

“He is definitely not just a wet-tracker,’’ McEvoy said.

“His form from previous seasons shows he acts on firm ground as well.

“I would think we are going to get a track with a bit of ‘juice’ in it anyway.’’

Angel Of Truth (cerise) gave a good account of herself against Verry Elleegant and Addeybb last week. Picture: Getty Images for the Australian Turf ClubSource:Getty Images

Angel Of Truth earned his reputation as a wet-tracker when he won the Tulloch Stakes on a Heavy 10 and the Derby on a Soft 7 two years ago.

But many classic winners struggle as four-year-olds as Angel Of Truth did last season, failing to place in 11 starts.

As a stronger, more mature five-year-old, Angel Of Truth has been working his way back into form including his close third, beaten less than a half length behind Tancred rival Mirage Dancer in the Group 1 The Metropolitan last spring on a track rated a Good 3.

If Angel Of Truth can win the Tancred, it will enhance Hall of Famer John Hawkes’s race training record.

Hawkes has prepared a record five winners of the Tancred including Octagonal’s dual successes in 1996-97, and with Curata Storm (2001) and Freemason (2003), before setting up a training partnership with his sons, Wayne and Michael, and winning the race again with Fiumicino (2009).

Master Of Wine is also on the quick back-up out of the Ranvet where he ran a competitive sixth, beaten just over four lengths.

“He is coming back a little in class and looks well placed,’’ McEvoy said.

“The quick back-up is not a concern, the Hawkes team know him so well.’’

McEvoy has also picked up the ride on Master Of Wine in the Neville Sellwood Stakes. Picture: AAPSource:AAP

Mr Mozart, an impressive winner on debut at the Warwick Farm midweeks, has drawn right off the track in barrier 17 but with the field restricted to 13 starters, he will come a more favourable starting position.

With James McDonald required for Coolmore filly Personal, McEvoy takes over on Hungry Heart, who was an impressive last start winner of the Phar Lap Stakes.

“I rode her in a piece of work last weekend and she showed she has come out of that race in great order.

“I don’t think the extra distance is any problem. She is a sweet, relaxed filly and I think with her style of racing 2000m will be fine.’’

McEvoy, who rode a Group 3 double on Favorite Moon (Manion Cup) and Seasons (Birthday Card Stakes) at the Golden Slipper meeting last week, is hoping to continue his winning form with a full book of nine rides on Tancred Day.

They include the Gerald Ryan and Sterling Alexiou-trained Bottega in the Group 3 $160,000 Doncaster Prelude (1500m).

Bottega resumed with a narrow loss to Gem Song in the Newcastle Newmarket and gets into the Prelude with only 53.5kg – but he has drawn the outside barrier in the 15-horse field.

“We were just beaten in the last hop at Newcastle and he has been given a bit of time between runs which suits this horse,’’ McEvoy said.

“He’s in good form and if we can off-set that wide barrier he is another good chance for me on the day.

“We had a successful Slipper Day last weekend so hopefully we can keep that momentum going through the carnival.’’