The expectation is James McDonald will have the pick of the rides on the first day of The Championships, but good barriers are just as important for the premier jockey’s two group 1 favourites and Australian Derby second-pick Sky Lab.

McDonald was happy with gate 12 for Avilius in the Doncaster, which is a $15 outsider, and six for Sky Lab in the Derby was good, but when he heard gate five for TJ Smith favourite and defending champion Nature Strip, and also for Sires Produce Stakes punter’s pick Anamoe, he just smiled. 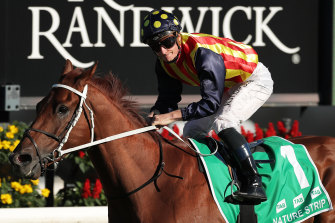 “That’s beautiful,” McDonald said. “What did Eduardo draw?” he asked of his main rival in the TJ Smith. The reply came as barrier eight. “That will do,” he said.

McDonald will play a major role in the group 1 races on Saturday and it is why Godolphin sought him out for Anamoe and Avilius in the Doncaster.

“I’ll get a little anxious later in the week, but if you’re not doing that you shouldn’t be in the game,” he said. “This is our time to shine, and when you’re riding these sorts of horses, you want to do your part.

“The good barriers help, all I would like now is a bit of rain because a soft track is going to help all of mine.”

McDonald dominated the TJ Smith on Nature Strip last year, but it will be a different race against Eduardo this time, which showed he could go with the star sprinter and beat him in the Challenge Stakes in a track record last month.

“It’s been a beautiful preparation this time. He is moving well, he is moving so well,” McDonald said of Nature Strip.

When McDonald goes quiet, it usually reflects confidence. “Nature Strip is definitely not going any worse than when he won this race,” he said.

McDonald will start and finish his group 1 day in the Godolphin blue. He will be on Anamoe at a good gate, after drawing wide in the Blue Diamond and Golden Slipper where he ran third and second respectively.

“It was a good call to get,” McDonald said of the booking from Godolphin. “He is an exciting colt and was the run of the race in the Golden Slipper.

“He jumped from the widest gate and rattled home, and arguably if he drew a [good] gate you could make a case he would have won it.”

He returns to the saddle of Avilius for the first time since winning the Tancred Stakes in 2019 as he reaches his target in the Doncaster.

“It has been a while since I rode him but he is quality,” McDonald said. “If this rain keeps up, he is going to be a huge chance.”

Sky Lab might be the second pick in betting behind filly Montefilia for the Australian Derby, but McDonald believes he is the strongest in the race. The Rosehill Guineas runner-up has been building to this day for months and McDonald can’t wait to get to the final stages of the 2400m.

“He will be the best stayer in this race, the only question is if he is the best horse,” McDonald said. “I can’t wait to get to the last furlong with him because he won’t be stopping.

“Paul [Perry, trainer] has planned it perfectly and I think he will improve out of that Rosehill Guineas.”

Meanwhile, the first day of the Easter Sale set records. Eleven lots broke the $1 million barrier, with a Snitzel colt out of Rising Romance leading the way. It brought $2.5 million from Hawkes Racing.