Tips and race-by-race preview by Ray Hickson for Friday’s Albury Cup meeting. Selections based on a good track.

The Waterhouse-Bott stable has an interesting debutant in two-year-old 13. Sacramento and any support on the day will be significant. He improved into his second trial, sitting off them wide out on a soft track and while drawn awkwardly here you’d expect him to be very competitive.

Dangers: 12. Terminal was sent out favourite on debut and seemed to have her chance in running second. But there’s scope for improvement and she’s drawn to get a nice soft run. Must be considered. 10. Sky Call was a beaten favourite over this course two runs ago then down to Echuca and she gained an inside run but was safely held as an odds-on favourite back to 1000m. She’s been competitive in all four starts, though, and should be so again. 3. Helcolore hit the line well first-up at Wangaratta before a game second after racing wide for most of the race at Benalla. Might want a shade further but close to a win if he can strike the right circumstances.

How to play it: Sacramento E/W.

Couldn’t find a lot of speed on paper here and that might give 5. Supplyzing a good chance to break through. Tried hard two starts back over a mile at this track and can forgive just an even effort around Corowa last time. Should be in the first few in running and if it’s run to suit he’s a good each-way hope.

Dangers: 2. Seeblume wasn’t disgraced in the Goulburn Country Championships qualifier first-up from a spell. He was safely held but made some ground to run fifth there and this is a much easier task. Entitled to be in the finish somewhere with even luck. 6. Uptown Lilly has been a beaten favourite at her past two starts at Bendigo and can’t make any real excuse for either. That said she can race on the pace and it’s not like she’s out of form so she has to be considered. 3. Fun Tickets probably needs a genuine tempo on but he’s racing well enough to be competitive. Just battled at Goulburn then kept coming from well back into third at Canberra. Down 2kg here so include.

How to play it: Supplyzing E/W.

3. Shinseki is flying this time in and he probably should have won here two starts back over a mile before a soft win at Benalla up to 2040m. Drawn one so should spent no petrol in the run and he shapes as though he’ll run out the extra trip. Sure to be in the finish.

Dangers: 4. Westham is proven at the 2400m with an easy win at Bendigo two starts ago. Outclassed last time at Sandown and didn’t finish the race off with any gusto. Forgive that run and he’s a serious threat. 6. Diamond Star Halo has battled a little in three runs back from a break but has struck heavy ground in two of them. Should race on the speed here. Her maiden win was over a similar trip at Newcastle back in July and if she can recapture that it puts her in the mix. 9. Haunted Stream deserves some thought given she was run down by Shinseki last start at Benalla. Only had the one go at 2400m and was unplaced but two runs back have been good and she can’t be left out.

How to play it: Shinseki E/W.

No reason to think 5. A Thousand Degrees can’t handle the class rise after a dominant maiden win over this course a month ago. He drops 3kg for the rise in grade but drawn soft and should get a perfect run behind the pace. Certainly a good each-way hope at least.

Dangers: 1. Smart Ain’t He is ex-Anthony Cummings and hasn’t had a trial but if he’s in good order he’s dangerous. Tends to race on the speed and has the draw to not do too much work, be guided by the market for any stable confidence. 2. Funding found the line pretty well late at the 900m at Corowa and you’d expect 1000m on the bigger track will be in his favour as he has a good record here. Definite chance.

4. Swizzle Sticks was placed in a 955m at Moonee Valley two starts ago then dropped right out at Sandown after racing on the pace. Freshened up so expect she can return to something like her best and that would see her competitive.

How to play it: A Thousand Degrees E/W.

1. California Concord looks well placed here after a solid first-up third at Rosehill, making ground on a day that was hard to do. Extra 100m is a plus and the inside barrier is handy as well. Only win to date was second-up last time in and chance to repeat that.

Dangers: 2. So Magnifique opened up a massive mid-race lead at Wangaratta last start and staved them off to hold a two-length margin on the post. More controlled in front prior and was too good at Benalla. Both those over shorter trips and she has to prove herself at 1400m but sure to give a sight. 5. Mookareena is a very consistent filly and while safely held she stayed on OK in the much stronger Canberra Guineas a couple of weeks back. Will need a bit of luck but one of the main chances. 4. Jaytee’s The Fox came off a freshen up to run a nice second here then up to 1300m proved far too strong at Corowa. Up in class but distance suits and he’ll be running on again.

2. Emperor’s Way is bursting to win a race and he won’t get a better chance this preparation. Went down fighting behind Hiyaam at Randwick fourth-up and he does love 2000m on a big track on dry ground, which he gets here. Looks enough speed engaged for him to stalk and present at the right time. Hard to beat.

Dangers: 15. Nothin’ Like Harry has put in a couple of uncharacteristic runs at Sandown and Randwick and was sent back to the trials for a confidence booster, which seemed to work as he put away the 1000m gallop in style. Started $11 in this race last year when far less experienced. If he fires he’s a knockout chance. 7. Valac is a flashy grey front-running type and he gave a big sight at Flemington when run down late over this trip by Hang Man. Expect he’ll be thereabouts again. 1. Ambitious is very hard to line up. He’s been going around at weight-for-age and drops to a Listed race with 62kg. Every chance and droppd out behind Avilius at Caulfield but on his best form he’s too good for this lot. The gamble is on finding that best form. 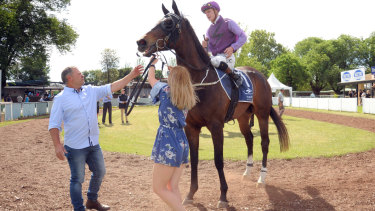 3. Jester Angel is simply flying at the moment and there’s no way she doesn’t feature somewhere in the finish of this scamper. Won her last three in the country with a solid fifth at Warwick Farm in between and she was soft with 61kg winning at Corowa last time. Drawn perfectly and hard to beat.

Dangers: 6. Kyzamba hasn’t raced for two months since an easy enough win at Cranbourne over 1000m. Lightly raced with a good strike rate and a versatile racing pattern. One of the main chances. 11. Another Sin is smart on his day and won his only start here back in March. Looked good winning a trial at Newcastle on February 27 and bears close watching here fresh. 1. Just A Bullet won this race in 2017 and resumes after a game third over 900m at Newcastle in September. No match for I Am A Cool Kid in a Scone trial recently but few would be. Capable of giving some cheek here.

How to play it: Jester Angel E/W.

Would love an extra 100m but 14. Nicconi Poni should be in the finish somewhere with a bit of luck. She’s only won once in 15 starts but she’s strung together six placings on end and she’s been attacking the line. With clear running here there’s every chance she can finish over the top.

Dangers: 8. Balonne was a shade unlucky in a stronger race at Canberra last start. Take a look at the stewards vision of the home straight and he didn’t get a crack at them until the race was over. Fitter for two runs back and drawn well he’s a big improver. 15. Chayanne hasn’t raced since December but she’s yet to miss a placing when first-up so is one to keep in mind. The trip will be a bit short of her best but expect her to be running on late. 5. Wrecking Ball had his chance when runner-up over this course two starts back then hit the line a bit too late at Wangaratta but still a solid second placing. Needs a bit of luck but racing well and has to be considered.

How to play it: Nicconi Poni E/W.