Track Good 4 and Rail out 2m, so predominantly on or near the speed

Intriguing and potentially strong maiden to start where a few have solid claims. Randwick 3YO gelding 4. Oslo looks well placed from a low draw second-up with the blinkers off after a fair closing run at Kembla. Ultimately will get over more ground, but second up in first prep ran on nicely behind the smart Sir Elton at Gosford.

Dangers: Warwick Farm 3YO gelding 1. Spaceboy was gunned down resuming by a smart debutant at Hawkesbury, and that form should hold up, although has to carry 3.5kg more over a longer trip; while 3YO Newcastle colt 5. Syncline just missed on debut, and draws to park in the same trailing spot, but this is tougher.

How to play it: Oslo to win and quinella 1 and 4
Odds and Evens (First 2): Split 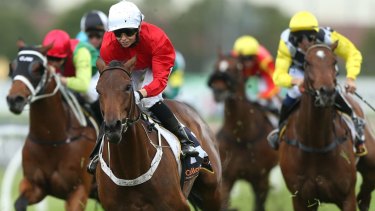 Prepared to give imported wallet-killing 5YO Newcastle gelding 9. Urbino another chance. Has let punters down badly as hot favourite in three runs at the provincials, but this isn't strong, and drawn to get a cosy run right behind the speed down 2.5kg from his last effort.

Dangers: Drawn the fence, Warwick Farm 4YO gelding 1. Canasta won his maiden here three runs back despite drifting in betting, and has boxed on okay from the front in his last two; while 4YO Randwick gelding 8. Time Stamp will go forward and improve at third start getting out to this longer trip.

How to play it: Urbino to win
Odds and Evens: Odds

Tricky affair at set weights over the mile. Warwick Farm 4YO gelding 2. Is That So can peak here fourth-up after a solid closing run at Goulburn. By So You Think so any extra ground a plus, and drawn to get plenty of cover off the speed.

Dangers: Liked the first-up run of 4YO Newcastle mare 6. Alam Mo Na who hit the line from well back. Just missed as a well fancied favourite second-up at Scone in first prep, and leading metro jockey gets back on. Progressive 4YO Randwick gelding 4. Prospero has fought on well from the front in two runs at Kembla, although drawn wider here, so imperative he jumps well. Big watch on 4YO Randwick mare 9. La Grisa who also finished well on debut in that same race as Alam Mo Na, and is nicely bred for longer trips; while 4YO Rosehill gelding 1. Corporal has had a little freshen-up via a quiet trial after an ordinary effort third-up at Kembla, but must be a query from the wide barrier under a big weight.

How to play it: Is That So to win
Odds and Evens: Evens

Very competitive maiden, with plenty of chances. Promising 3YO Randwick filly 11. Maisaa is banging on the door after three runs back on the limit weight and drawn the inside. Flashed home late in a good maiden at Kembla last start, and senior metro rider is a significant change.

Dangers: Local 5YO gelding and Japanese-sired 2. Developed (Orfevre x Miss Emma by Key Of Luck) makes his debut after some impressive work at the trials. Was pushed out from well off the speed to win his latest at Cessnock, and looks fit enough for this opening journey, with senior metro rider booked. Newcastle 4YO gelding 4. Schemer goes back up sharply in weight after finishing hard second-up behind Zell in a very handy maiden. Fitness shouldn't be a problem for 4YO Warwick Farm mare and first starter 5. Lady Highly (High Chaparral x Strategic Answer by Strategic) who has had four trials in five weeks, and draws a nice gate, but didn't really attack the line in his latest; while expect further improvement fourth-up from 3YO Godolphin gelding 7. Katona who has worked home nicely in some good maiden fields this prep, but will be forced a long way back again from the wide draw. Another debutant and stablemate to Developed, 3YO filly 12. Shimmering Light (Smart Missile x Miss Helsinki by Hussonet) has trialled okay and draws a good barrier.

Fairly deep maiden, but keen on 3YO Hawkesbury filly 1. Akari who chased home the smart Regimental Band resuming this track, and while up 3.5kg on that effort, has plenty of quality. Took on high class Libertini in back-to-back runs to open her career in the autumn.

Dangers: Warwick Farm 4YO mare 3. Threeood has finished off okay in two runs for new metro stable, and comes out of that race behind Regimental Band. Was competitive at Listed level in SA back in autumn. Progressive 3YO Godolphin filly 5. Duenna has hit the line nicely in successive maidens at Hawkesbury and Goulburn, although switch back to a smaller track may not suit. Rosehill 3YO filly 8. Sniperess trialled okay for top metro stable behind Danaat who flashed home on debut at Goulburn on Tuesday, and the blinkers go on; while 5YO Gosford mare 2. Furlana was completely unwanted in betting resuming in that race won by Regimental Band, but will improve second-up, although drawn off the track.

How to play it: Akari to win and quinella 1 and 3
Odds and Evens: Odds

Wide open race. Lightly raced 5YO Warwick Farm mare 3. Brigid Of Kildare is still on the rise. Finished over the top at Nowra last start after closing late in a stronger race at Hawkesbury. Down in weight, and should do little or no work around midfield from an inside draw.

Dangers: Local 6YO mare 2. City Of Love was very good late at Scone resuming under 60kg charging home, and draws to get a nice trail off the fence, but not a noted second-up performer. Scone 4YO mare 4. Couru won a BM 58 two runs back before fighting on strongly in a handy field at Scone, and down 3kg on that effort. Wyong 4YO mare 8. Trescha has improved lengths winning two of her last three at Tamworth, and while this is another step up, she's ready for the mile and stable is going well; while 3YO Randwick filly 5. Aesop's Fable has won her last two at Canberra and Goulburn in good style, and was scratched from Kensington on Wednesday, but faces more depth here.

Back on his home track, local 6YO gelding 4. Mo The Great looks much better suited third-up and significantly back in grade, although up 2.5kg from that solid closing run at Newcastle.

Dangers: Hawkesbury 6YO gelding 5. Spin Bowles has been just fair all prep, but draws to get a cosy run from the inside, and this race lacks depth; while watch the market on 7YO gelding and Rockhampton visitor 7. Rise To Fame who continually finished strongly from well off the speed in similar grade in Qld before doing his best work late under 60kg at Kembla.

How to play it: Mo The Great to winOdds and Evens: Split

Very even battle to finish, with plenty of chances. Smart 3YO Randwick filly 12. Yitai Synergy looks ready to return off two open trials, the latest cruising home from off the speed, and the third horse has since come out and won first-up. Won two of her last three, including the Red Crown at Muswellbrook as a hot favourite.

Dangers: Local 4YO mare and former Victorian 9. Interram looks ready to rock first up for a year. Thrashed Mr Quickie to win her maiden at just second start last spring, and has impressed in two open class trials for new provincial stable showing good early speed. Prepared to give 4YO local mare 1. Bare Naked Lady another chance after being crowded, and not finishing off on the Kensington track last start. Has been raced sparingly since late autumn in tougher metro company, and should be in the finish. Warwick Farm 4YO stallion 4. Bentley Magic also finds an easier race after finishing hard at Warwick Farm, and then no match for California Zimbol in a stronger BM 78 at Canterbury, but rises sharply in weight and drawn off the track. Improving 4YO Warwick Farm mare 10. Madam Oaks has won his last two comfortably at Canberra, and drops 3kg for this tougher assignment. Randwick 5YO gelding 3. Kosciusko resumed with a fair effort this grade at Newcastle, but will need some luck coming over from a wider draw; while 4YO Godolphin mare 5. Fallgold hasn't done much in two runs back, and also draws a wide barrier, but third-up record is sound.

How to play it: Yitai Synergy each way and box trifecta 1,4,9,12
Odds and Evens: Split

Scottish Premiership: Test your knowledge of the season so far with our Sky Sports quiz