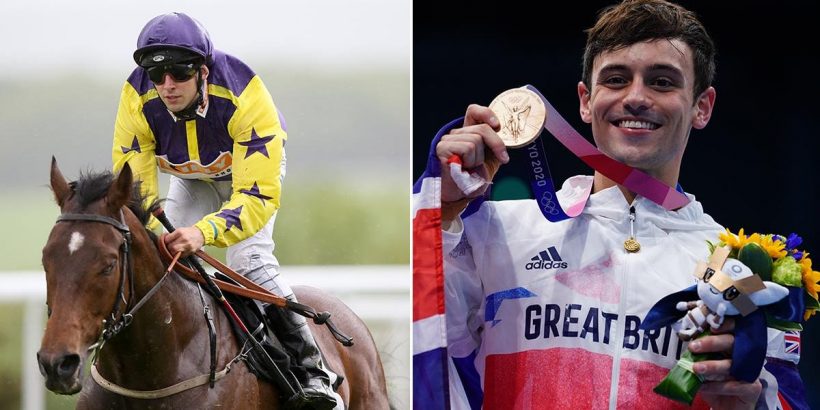 When Tom Daley came out in 2013, Jack Duern decided the time was right to break down barriers in his sport.

Around the same age as the Olympic gold medallist, he would become Europe's only openly gay jockey as a teenager.

Duern was barely 12 months into his career in the saddle, having made his first appearance on the racecourse two weeks after his 16th birthday, when he felt he had to tell people.

"Tom Daley was a role model to me," he said.

"I was so young. Although family and friends knew, no one at work did – it was daunting coming out to them.

"There was no-one in racing to look up to so seeing Tom doing it got my courage up."

It is a rarity for professional sportspeople to reveal their sexuality.

In July last year, an unnamed Premier League footballer revealed he was gay in an open letter, shared with Sky News by the Justin Fashanu Foundation.

James Adcock, who has refereed more than 500 matches at various levels right up to the Premier League, told his story to the BBC as part of National Coming Out Day.

Duern quit race riding in 2019, having previously cited issues around acceptance of his sexual orientation and opportunities to compete as two factors.

He returned this summer and hopes to add to the 74 winners on his record.

"I have experienced issues in the sport, but I believe things are changing and I'm proud to play my part in this," he said.

"Visibility is so important. I had to look to another sport to see a role model as an out gay man, so if I can use my platform to show one other LGBT+ person in racing they're not alone, I'll be very happy.

"I hope by sharing my story and the important work the industry is doing in this area, I can show racing will accept you for who you are."

Duern's sponsorship with Racing With Pride, the sport's official LGBT+ network in Britain which formed in 2020, has just been announced.

With the support of trainers including Simon Dow and Steph Hollinshead, he hopes to get his first winner on the board – and many more further down the line.

"And I hear from stable staff and ex-jockeys on the network, who felt they weren't able to say anything about it 20 years ago.

"It's great that we now have support in place to make racing as inclusive as possible."

David Letts, Chair of Racing With Pride, said: "We all admire Jack’s courage, and he is an important role model for other LGBT+ individuals who may not be out; his story demonstrates racing’s accepting environment where people have the opportunity to be their authentic selves and reach their full potential.

"Whilst there is still much work to do, we are proud of the progress the sport has made and hope that this visible on-course representation will help to further encourage open dialogue around sexual orientation and gender identity."