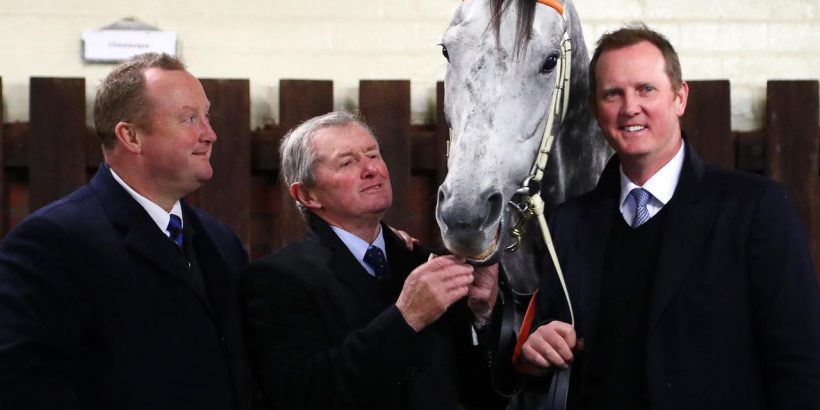 John Hawkes was only a schoolboy when the mighty Tulloch won in Adelaide but he remembers the race like it was yesterday.

“It was at the old Cheltenham track and the place was jam-packed.

“It was a long time ago but you don’t forget those days.’’

Tulloch was nearing the end of his magnificent career when he won in Adelaide in 1961 but the great horse was instrumental in forging the destiny of another champion of the sport.

Hawkes, 72, already had an appreciation for the thoroughbred but he left the racecourse that day in awe of Tulloch and with his mind set on becoming a trainer.

“I was riding ponies from the age of five and always loved being around horses,’’ Hawkes said.

“My father was a plumber but my uncle, Sid Carter, was a trainer and before school I would get up early to go and work at his stables then go back there in the afternoon.

“Horses might not be able to talk but they are loyal animals and they are smarter than a lot of people.’’

A decade after Tulloch raced in Adelaide, Hawkes started training at Morphettville.

In the 50 years since, Hawkes has trained more than 5000 winners, including 116 at Group 1 level, won nine Sydney trainer premierships, set a Commonwealth record for most wins in a season and joined the greats of Australian racing including Tulloch in the prestigious Hall of Fame

John Hawkes in 1994 at his Toltrice Lodge stables at Morphettville in South Australia.Source:News Corp Australia

Hawkes, who has been training in partnership with his sons, Wayne and Michael since 2008, is chasing more chasing more Group 1 success at Eagle Farm on Saturday with Wild Planet in the $1.5m Stradbroke Handicap (1400m) and Overmann in the $1m JJ Atkins Stakes (1600m).

“Wild Planet and Overmann will be competitive, they are in the mix,’’ Hawkes said.

“We have aimed Wild Planet at the Stradbroke, it’s the right distance and he’s got a nice weight.

“Overmann is a promising young horse going to 1600m and although he is still learning his craft, he is a genuine chance.

“Surreal Step was good the other day in the Ortensia Stakes. He was a bit stiff he didn’t win. He has drawn a good barrier and will be hard to beat.’’

The Hawkes stable also has juvenile Sacred Field lining up at Royal Randwick while stablemates Superium and Shaik are dual acceptors for Sydney and Brisbane.

In a wide-ranging interview with The Daily Telegraph’s Ray Thomas, Hawkes discussed his career, the highlights, the issues facing the sport, and what the future holds.

WHERE IT ALL BEGAN

Hawkes rode the first winner he trained – King Of Shadows. It was 50 years ago and he has been training winners ever since but his riding career is now only a fading memory.

“I became an apprentice jockey so I could learn as much as I could,’’ Hawkes said.

“But I was only a B-grade rider and I had a dual licence when I started out as a trainer. My ambitions were to be as successful as I possibly could.

“There were so many superstar trainers back then. Bart (Cummings) was training at Morphettville, CS (Colin Hayes) was at Port Adelaide before he moved to the Barossa, there was Tommy Smith, Neville Begg, Angus Armanasco, Geoff Murphy.

“The competition was tough but I had always wanted to be a trainer so I gave up riding to concentrate on training.’’

Hawkes had been training for less than two years when champion filly Toltrice provided his first Group 1 wins in the 1972 Thousand Guineas and VRC Oaks.

“I used to ride Toltrice’s Mum, Tolado, and her owners said they would send me a horse when I started training,’’ Hawkes revealed.

“You need to have a bit of luck in this game – and loyal clients – and I was fortunate to get Toltrice very early in my training career.

“When Toltrice won the Oaks, I trained the quinella with Little Papoose finishing second. It was a good start to my career.

“We then got some good horses like English Wonder, Galena Boy, Runyon, Harpagus, King’s Helmet – I think we won 14 Group 1 races out of Adelaide and I was second to ‘CS’ in the trainers premiership eight years in a row.’’

Hawkes moved his training base to Melbourne before his career changed forever in 1992 when he accepted an approach by high-profile Sydney owners Jack and Bob Ingham to take over as their private trainer.

“Everyone said I would be gone in 12 months,” Hawkes said.

“But I was still training at Crown Lodge 16 years later.

“Jack and Bob gave me an opportunity and I had the best job in racing. We had some fantastic years before I decided to set up a training partnership with my sons.’’

During his time with the Inghams, Hawkes trained champions Octagonal and Lonhro, the freakish filly Unworldly, Golden Slipper winners Guineas and Forensics, plus the likes of Freemason, Railings, Arena, Over, Paratroopers, Mentality and Fiumicino.

The racing world was shocked in 2008 when Hawkes made the decision to leave Crown Lodge and start from scratch in a training partnership with his sons, Wayne and Michael.

“The boys had been working hard with me behind the scenes and it was time they got more credit for their hard work so I felt it was right to form the partnership,’’ Hawkes said.

“They were brought up in racing and both were very comfortable around horses at a young age. Wayne was always going to get involved but it took a bit longer with Michael.

“We wanted to see if Michael preferred to do something else but eventually he worked out he wanted to get into racing.’’

Hawkes said the opportunity to work with his sons will extend his own training career.

“If they had not got into training I most probably would have always had a few in work but I would have scaled right back,’’ he said.

The shortage of stable staff and trackwork riders, and the activism of animal welfare groups are the biggest issues confronting the racing industry, according to Hawkes.

“I think we probably should have been doing more 20-30 years ago to promote this industry but back then people on the land were more used to working with horses.

“These days they are riding motor bikes and flying helicopters and don’t get exposed to horses as much.

“We need to promote this industry as a track rider can earn a good wage.’’

On the welfare issue, Hawkes defended the vast majority of people working in the racing industry who care for the thoroughbred.

“We always take care of the horse, 99.9 per cent of people in the racing industry look after their horses,’’ he said.

“The ones that are having a go at the racing industry have no about idea about horses. They don’t know what horses enjoy.

“But it’s the way the world is today, so we need to keep promoting the good things about racing.’’

Octagonal, Lonhro, All Too Hard, Unworldly and so many other topliners going back to Toltrice have provided Hawkes with numerous career highlights.

But there is one moment that stands out from the rest – when the “grey flash” Chautauqua came from last and won the 2016 Chairman’s Sprint Prize in Hong Kong.

“The biggest highlight was winning the Group 1 in Hong Kong with my family,’’ Hawkes said.

“We won that race with a horse we purchased as a yearling and he went all the way to be the world’s best sprinter.’’

The robust Australian racing and breeding industry is a world-leader and Hawkes felt no desire to take up offers to train on the international stage.

“There was a few opportunities that came up to train overseas but I really didn’t push it and to be honest, I didn’t want to,’’ Hawkes said.

“When I left the Inghams, I was nearly 60 and I didn’t have a big window.

“But I was happy to stay here and move on to the next phase of my career with my family.

“Australia is the best country in the world and it has the best racing – why would you want to go anywhere else?”

It’s almost 60 years ago to the day when Tulloch scored a famous win in his farewell race, the 1961 Brisbane Cup – but retirement is the last thing on Hawkes’s mind

“I’m not sure I would like to be starting out as a trainer these days because it is so competitive, it’s seven days a week and you need to put in the hard yards,’’ Hawkes said.

“Training is a tough job and racing is a completely different model to when I started (in 1971).

“Back in those days, racing was twice a week but now it is seven days a week, 52 weeks of the year as the model is all about TAB and (wagering) turnover.

“But over the years, we have managed to win most of the big races. We don’t have the big numbers in work now but our stable does produce a lot of colts for stud and we do have some very loyal owners.

“My wife, Jen, is the backbone of our stable and it great I can now get to work with my sons now.

“I’ve had a good career but I’m hoping to keep it going for another 20 years if I can.

“Doing something you love and working with my family – it doesn’t get much better than that.’’