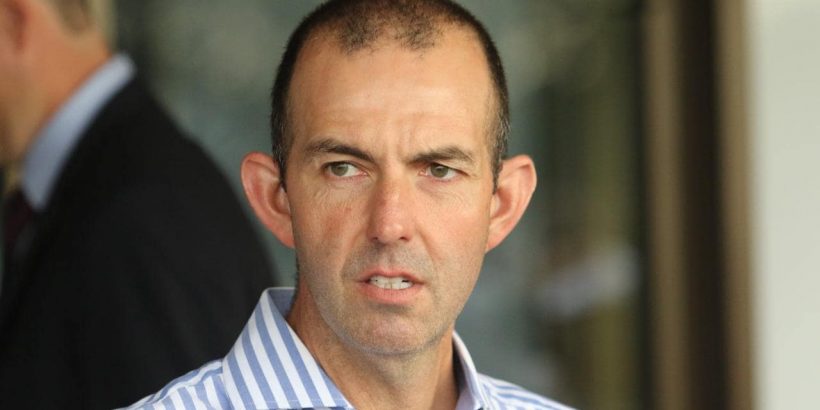 Jason Coyle saw a family trait in Chervil in her first-up win at Goulburn which has him looking forward to testing the promising mare in stronger company at Warwick Farm on Wednesday.

The daughter of Charge Forward is closely related to Coyle’s former smart mate White Moss who was also bred and raced by the Esplin family and like her relative, showed great tenacity in her recent victory after things didn’t go her way in the run.

After being taken back to last from the wide gate at Goulburn, Chervil was held up on straightening then put in a right foot step half way down the straight after shying at another runner.

“She stole victory from the jaws of defeat,” Coyle said.

“She had every excuse not to win but was still able to prove herself the class horse on the day and get the job done.

“That was a positive and I think it shows she is capable of coming to town and stepping up in grade.”

It was that performance that proved top him that she will be more than competitive against stronger opposition.

“She’s only lightly raced and still has bit to learn but a one trait of that Pay My Bail family is that they tend to have that racing instinct,” he said.

“She’s not an overly big filly but she has got a good stride on her and that will to win so hopefully that will take her a long way.

“It’s an old cliche but there does seem to be a bit of upside to her.

“Hopefully she can prove that over the winter months.”

While Chervil is just beginning her racing career, stablemate Insensata has come to the end of hers and will step out for the final time on Wednesday afternoon.

Handy mare Insensata (left) has he final start this week before being sold at the National Broodmare Sale later this month. Photo: Craig Golding/AAP ImageSource:AAP

“This will be her last run before we pull the pin on what has been a pretty solid career and she heads to Gold Coast for the National Broodmares Sale later this month,” said Coyle.

“She was purchased for under $30,000 and got up to be competitive at stakes level although she was able to quite break through.

“She has been very Saturday city class horse who won a couple straight and finishes with just under $500,000 in prizemoney.

“She has definitely been a stable favourite.

Coyle was more than happy with her first-up run even though she finished ninth at Warwick Farm two weeks ago when just three lengths from the winner, Strawb.

“She sprinted really well and threatened but maybe peaked the last 50 metres.

“The step up to 1400 metres here suits her better. I just wished the track was dry.

“While she has won on a heavy track, she has never been great on it.

“Whatever the result, she will give her all.”

CUMMINGS HAS LAVA READY TO EXPLODE

Trainer Edward Cummings is excited by the prospects of promising stayer Lava and believes he will be tough to beat at Warwick Farm on Wednesday afternoon.

The five-year-old has always given Cummings the indication that he would be at his best when racing over a genuine staying distance and turned in a strong effort when fourth to Alakahan at Kensington last start.

“I think he is primed to run up to that and probably be better again,” Cummings said.

“The other day, he paraded a bit above himself so I’m expecting him to improve off that run and the experience.

“It was only his second run at the trip and he was on a back-up as well.

“He is two and a half weeks between runs now and it sets up nicely for him.”

A son of former top racehorse and sire Reset, who only passed away last week, Lava showed he has plenty of ability with a nice win over an unsuitably short 1500m at Newcastle back in February.

“He’s very a progressive stayer and I think the fact he was able to win over 1500 metres at Newcastle is a good indication of his ability because that distance was well short of his best,” said Cummings.

“My only query is that it’s likely going to be a heavy track which he hasn’t been exposed to yet.

“If it was a soft track, I would be more confident. That’s not to say he won’t handle a heavy track; it’s just something we don’t know at this stage.”

Cummings has been waiting to take the covers off Dark Rebel and the two-year-old will make his debut in the opening event.

The son of Astern has shown his trainer enough ability to nominate him for the BRC Sires’ Produce and J.J. Atkins in Brisbane.

“I think he has got some class,” Cummings said.

“From the way that he works and the opinions of everyone who has sat on his back, I don’t have any qualms about him being first-up over 1400 metres.