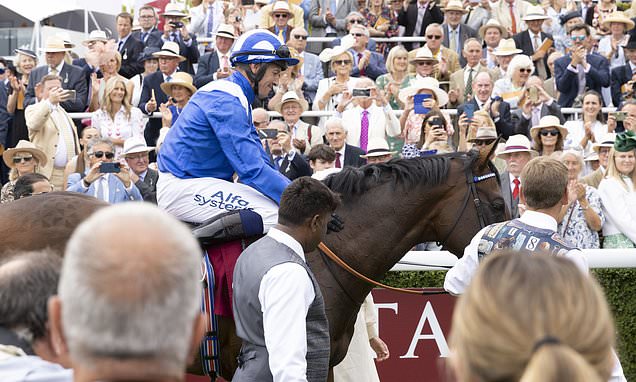 Trainer William Haggas likened super-charged Baaeed to a motorcycle competing in the Tour de France after his superstar made it nine races unbeaten with another scintillating display in the Qatar Sussex Stakes at Goodwood.

There was more sweat on the brow of the Newmarket trainer than there was on Baaeed after Jim Crowley’s mount smoothly moved through the gears before beating French 2,000 Guineas winner Modern Games by a length and a quarter.

Last year’s Sussex Stakes winner Alcohol Free, who came into the race off the back of a victory in the July Cup at Newmarket, was a further length and three-quarters back in third. 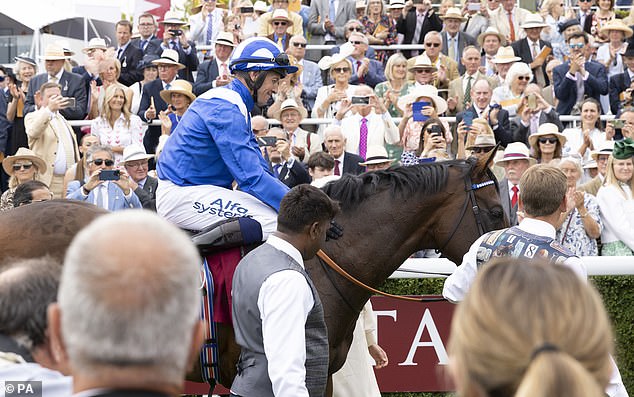 They were two quality placed horses put in their place by the flawless 1-6 favourite and the ominous warning from Crowley was that he believes Baaeed could look even better when he steps up from a mile to a mile and a quarter for the Juddmonte International Stakes at York on August 17.

The jockey said: ‘He is so good it seems unfair at times but I’m not complaining! I’ve ridden some lovely horses but this is just another level.

‘The excitement and build-up before the race is great. I’m not a great sleeper but I always sleep well the night before riding him. He gives me confidence.

‘He could be even better over further — those mile and a quarter horses won’t have his gears.‘

Former champion jockey Crowley reckoned that Baaeed could have looked even more impressive had he not pricked his ears and started slowing down when hit by a wall of sound from the Goodwood grandstand. 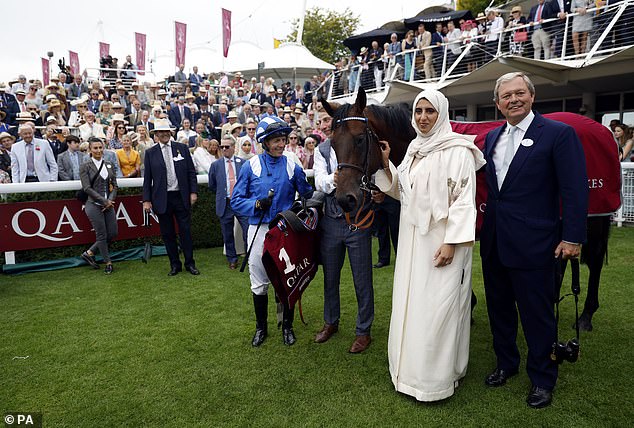 We have, of course, been here before with an unbeaten colt winning the Sussex Stakes while holding the title of the world’s highest-rated racehorse — courtesy of the mighty Frankel. Inevitably, comparisons have been made given both colts won the Lockinge Stakes at Newbury and Queen Anne Stakes at Royal Ascot before arriving at Goodwood in their four-year-old seasons.

They are expected to end their careers in similar fashion too, with the Champion Stakes at Ascot on October 15 likely to be Baaeed’s final run, just as it was when the Sir Henry Cecil-trained Frankel beat Cirrus Des Aigles in 2012.

Haggas shies away from that comparison and, to be fair, Frankel produced performances which rated higher on the wow-factor scale. 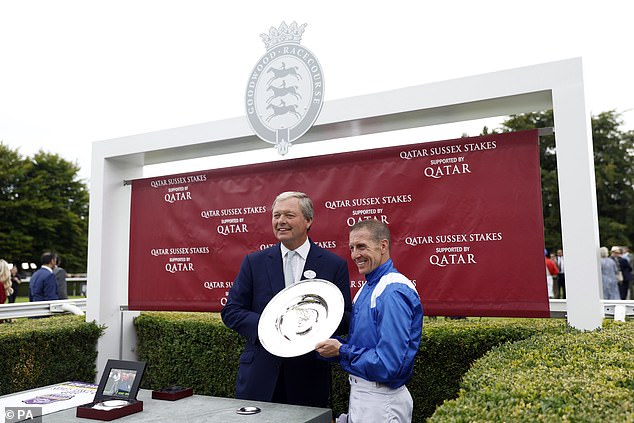 A better running-style comparison for Baaeed would be with his sire Sea The Stars, winner of the 2,000 Guineas, Derby, Eclipse Stakes, Irish Champion Stakes and Arc in 2009 with the chilling precision of an assassin, never winning by far but always delivering with his withering turn of foot to cut down his rivals.

Thoughts of a tilt at the Arc were briefly considered for Baaeed — who carries the Shadwell Stud colours of his late owner Sheik Hamdan Al Maktoum — before being dismissed according to Haggas, who said he is determined to enjoy his colt’s final two runs.

The trainer added: ‘I said this to Jim in the paddock, we’ve got him for two more races after this so let’s just enjoy him because he will most likely go to stud at the end of the year. I’ll spend the rest of my training career trying to find the one as good as him.’