Chris Waller admitted the heavy track and fitness played a big role in the order his stayers finished in the Premier’s Cup after he had the first five home with Wu Gok making it another victory on the heavy track at Rosehill on Saturday.

“He is the best wet-tracker and is very fit, so that’s a good combination,” Waller said. “The Perth horse [Come Play With Me] went well and his form said he would enjoy that track but he is starting his prep where Wu Gok is coming to end. 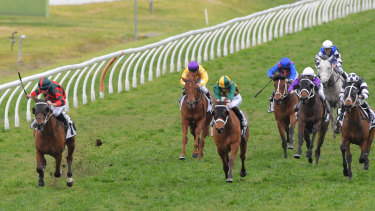 Tommy Berry and Wu Gok stride away to win the Premier’s Cup at Rosehill.Credit:AAP

“If it stays wet I think we might run Wu Gok again in the Wyong Cup because as you saw, he loves that sort of track.’

It was Wu Gok’s eighth win and seventh on wet ground, with six of those on heavy tracks. Tommy Berry made it a feature double after winning the San Domenico Stakes on Exceedance and had been smiling since the rain started on Thursday.

“I rode him last start and I said to Chris, ‘We just need a track with a bit of sting out of it again’, and he got it,” Berry said. “He was very well-placed, he was down in the weights. I’ve been making an effort in the last few weeks to ride 53 [kg] on a Saturday so I could get some decent rides and I was lucky enough to get this bloke.

“I always knew they’d probably come off the rail a bit. It’s getting a bit chewed up this part of the day but he lapped it up.

“He travelled so sweetly in the run, he was so happy. He found about a length at the top of the straight and held it the whole way to the post. He’s a horse in form at the moment.”

The Gai Waterhouse- and Adrain Bott-trained Wolfe drifted to start at $4.40 and put in the worst run of his career, clearly not handling the track. He was beaten on the turn, dropping out to only beat two home.

Wu Gok drew away for a length victory from Come Play With Me with Carzoff, another that had campaigned through the winter in Melbourne, two lengths away in third. So You Win and Savacool filled the next couple of spots.

“It is good to see them all going well,” Waller said.

“I was very happy with Come Play With Me and I would love to get him through to a Metropolitan because I have been trusted with him by another trainer.

“I spoke to Adam Durrant this morning and he knows his horse so well and I want to do the right thing by him.”

Waller scratched Sydney Cup winner Shraaoh and Gurl Tuesday to wait for a drier track and with Finche, fourth in the Melbourne Cup, ready to come back, he managed his team across the races coming up.

“We kept a couple at home – Shraaoh and Girl Tuesday – thinking today might have been a bit tough for them at this stage of their preparation. Overall, I think the race was good and we’ve got some nice stayers going forward for the spring,” he said.

“There is a good selection of races. There is the Kingston Town coming up. Ideally, you get most of them going towards The Metropolitan and a few can head down to Melbourne at some stage, too.”