Retired jockey Glen Boss has urged people to put their hand up if they are struggling after revealing he attempted suicide in 2019, not long after returning to Sydney from Singapore.

The 52-year-old jockey, who rode his final race in Australia at Caulfield on Saturday, said he ended up in hospital after being found unresponsive in a hotel room in July 2019, when he was in “a hell of a dark place”. 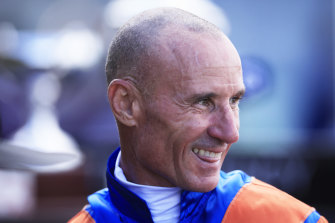 Retiring jockey Glen Boss has spoken about the help he got from family and friends when he was in a dark place.Credit:Getty Images

Boss credited his family, who raised the alarm, his manager Liam Prior and long-time friend Scott Perrin for saving him and putting him back on track.

He said he had been low after breaking his neck in a race fall in 2002, but the period after he returned from Singapore was his toughest.

“As an athlete and a person you’ve got high expectations and when you’re not meeting those expectations, you go into a dark spot,” Boss said.

He recalled spending time at Perrin’s parents’ place in Nagambie in Victoria, where he faced up to the direction his life had taken.

He said he now knew he should have asked for help earlier, which was why he was happy to relay his experience to encourage others who face tough times.

“It’s OK to put your hand up because you can’t do it alone. There’s no way you can do it alone.

“So put your hand up and ask for help and I promise you when you do that, that’s the first step of starting to feel good again … you become a different person.”

Boss won the Epsom Handicap, the Everest and the Golden Eagle later that year as he recommitted to racing and life, having reached the pinnacle between 2003-2005 when he rode champion mare Makybe Diva to three consecutive Melbourne Cup wins.

The 52-year-old also revealed his time in the saddle was not quite up as he will ride in the invitational Saudi Cup in February against the world’s leading jockeys.

Crisis support is available from Lifeline on 13 11 14.