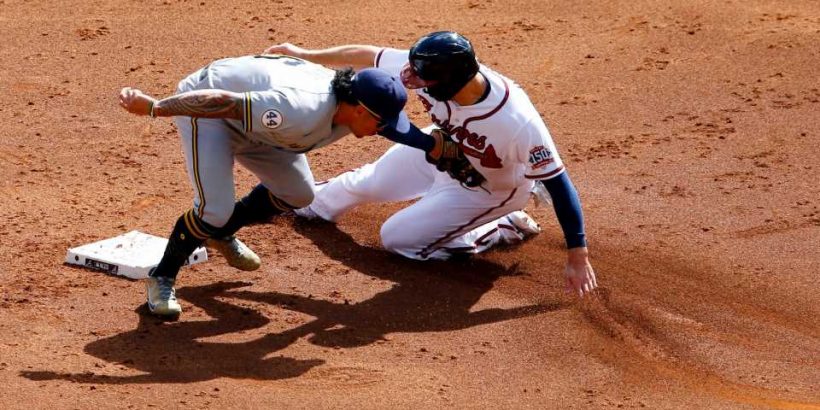 The Braves should have taken a 1-0 lead into the third inning of their NLDS Game 3 matchup against the Brewers. Instead, center fielder Adam Duvall will be credited with a TOOTBLAN.

In the bottom of the second inning, Braves catcher Travis d’Arnaud sent a fly ball 321 feet to left field in what looked like a routine sacrifice fly. Though third baseman Austin Riley is no burner, his sprint speed has him listed in the 69th percentile among MLB players, per Baseball Savant, and that fly ball was plenty deep enough to score him from third.

But Brewers left fielder Christian Yelich displayed his alertness, throwing to second baseman Kolten Wong, who slapped a tag on Duvall, who was trying to tag up from first and move into scoring position. Duvall was tagged out just before Riley was able to cross the plate, ending the inning and keeping the game scoreless.

According to the TBS broadcast, Yelich’s throw was clocked at 82.9 mph and it traveled 168 feet to nab Duvall at second.

Wondering at how close it was? Take a look at the freeze frame of where Riley was when Duvall was tagged out by Wong.

“It’s frustrating ’cause like we said earlier and before the series started, runs are going to be at a premium. Can’t make those mistakes,” Braves manager Brian Snitker told the TBS broadcast crew between innings.

Runs certainly will be at a premium between the two starting pitchers taking the hill for the Brewers and Braves. Milwaukee turned to its No. 3 starter, Freddy Peralta, who posted numbers good enough to be an ace on any other staff. He finished the 2021 regular season with a 2.81 ERA, 3.12 FIP and 4.0 WAR. The Braves turned to rookie Ian Anderson, who had a 3.58 ERA and 4.12 FIP with a 1.9 WAR in his first full season of MLB action.

Duvall has proven himself to be a capable baserunner. He’s not a premium base stealer, but his sprint speed checks him in at the 86th percentile, according to Baseball Savant.

The TOOTBLAN Tracker hasn’t been updated since 2018, but rest assured that Duvall would certainly be credited with one had it been active. TOOTBLAN, for those unfamiliar with the term, means Thrown Out On The Bases Like A Nincompoop.