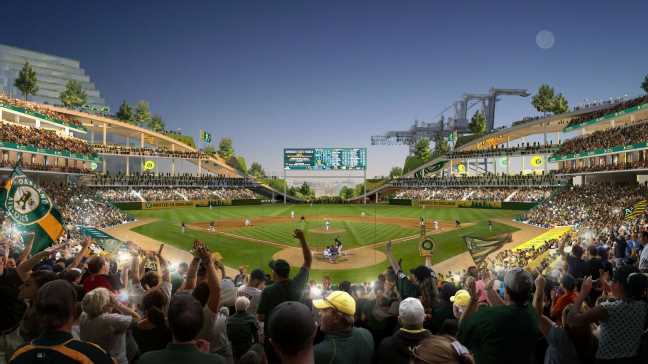 Oakland City Council members voted 6-1 in favor of a non-binding term sheet for the Oakland Athletics’ proposed waterfront ballpark on Tuesday, but the session ended with confusion as to whether negotiations between the city and the team would continue.

A’s president Dave Kaval stated during the session that the new term sheet, consisting of city amendments, “is not a business partnership that works for us,” echoing his sentiments from Monday when he told ESPN that a “yes” vote under the city’s terms was “akin to a ‘no’ vote.” Kaval expressed concern that some of the amendments — covering affordable housing and anti-displacement protections, among other items — consisted of language that the A’s were seeing for the first time and that the team was “still digesting” some of them.

The A’s did not immediately respond to a request for comment at the conclusion of the session. In a joint statement, Oakland Mayor Libby Schaaf, City Council president Nikki Fortunato Bas and vice mayor Rebecca Kaplan called the vote “a milestone in our mission to keep the A’s rooted in Oakland and build a world-class waterfront ballpark district that will benefit the community for generations to come.”

The biggest issue coming in stemmed from a $352 million payment in offsite transportation improvements and infrastructure upgrades that the city did not agree to subsidize by creating a second financing district at Jack London Square, which sits adjacent to the Howard Terminal site where the 35,000-seat stadium would be constructed. In its presentation, city official Elizabeth Lake ensured that the A’s would be reimbursed for that payment through local, state, federal and other regional funds, saying: “We believe the city has solved the issue the A’s identified as most critical.”

The A’s, seemingly, did not agree.

“There has been progress in the negotiation,” Kaval said when it was his turn to speak. “We’ve moved and made concessions, the city’s made concessions, but I think it is important to remember that the current term sheet, even with these amendments, is not something that the A’s have consensus around. It’s not a term sheet that we proposed, with edits that we have come together in mutual agreement, and I just really wanna stress that voting ‘yes’ on something that we don’t agree with, or that we don’t have consensus around, is not an effective path forward. And so I really wanna work with the council to see how we can get something that we agree to voted on before the [summer] recess, as opposed to voting on something that doesn’t work for our side.”

Carroll Fife, the lone Oakland City Council member who abstained from voting, circled back with Kaval to clarify his stance and stated: “I’m not exactly [sure] why we’re even here today.”

“If the A’s are not happy with what was produced today,” Fife went on, “and are still talking about leaving after the city has bent over backwards and provided some of their best work in the interest of Oakland residents, and come up with all of these concessions, even about how all of these wealthy owners don’t have to pay for off-site infrastructure, I don’t know where we go from here — after doing somersaults, after receiving insults, after being disrespected, after all of the things Oakland A’s fans and Oakland residents have gone through over this last little while. I don’t know where we go from here if they’re still telling us that they are not rooted in Oakland, that they are not willing to accept what the city staff has put together. … It’s not a negotiation. It’s really, ‘Do what we say, or we will leave.’ That is not rooted. That is not respectful.”

The A’s have spent the better part of the past two decades hoping to secure a new stadium in the Bay Area, a pursuit that took them through San Jose, Fremont and multiple sites in Oakland, most notably around Laney College. Renovations of the current Coliseum site, where the A’s have played since 1968, have been deemed nonviable largely because of they team’s stated desire for a downtown location.

All that is seemingly left to prevent the A’s from leaving Oakland — and following the recent paths of the NBA’s Golden State Warriors and the NFL’s Las Vegas Raiders — is this latest ballpark proposal in the Port of Oakland.

The A’s made public proposals in April stating they would privately finance the ballpark, which will cost an estimated $1 billion, while also providing $450 million in community benefits and arranging for an additional $11 billion in private investment to eventually build up the surrounding neighborhood. But the City of Oakland made a counterproposal on Friday that Kaval said Monday “lacks details and specifics and really doesn’t answer any of the questions that we have that needed to be addressed to continue to move forward.”

The project also includes 3,000 residential units, up to 1.5 million square feet of commercial space, up to 270,000 square feet for retail, an indoor 3,500-seat performance center, 400 hotel rooms and up to 18 acres of publicly accessible open space.

The A’s lease at what is now called RingCentral Coliseum expires after the 2024 season. If ultimately approved, the Howard Terminal ballpark wouldn’t be ready until 2027 at the earliest, leaving the A’s with at least a two-year gap to cover in Oakland.

In the meantime, team officials have continued exploring Las Vegas and its surrounding areas as an alternative. Kaval and A’s owner John Fisher have made three trips to southern Nevada this year and plan to return there on Wednesday. Major League Baseball commissioner Rob Manfred said before last week’s All-Star Game that it would be “a mistake” to refer to the Las Vegas option as a bluff, calling it “a viable alternative for a major league club.” Other relocation options — including Portland, Oregon; Nashville, Tennessee; Vancouver, British Columbia; and Montreal — could materialize if the A’s deal with the city falls through.

“Based on our extensive negotiations, shared values and shared vision, we believe the A’s can and should agree to the terms approved by the City Council today,” the city’s statement read. “This is the path to keeping the A’s Rooted in Oakland in a way that protects our Port and tax payers and will produce the benefits our community demands and deserves.”