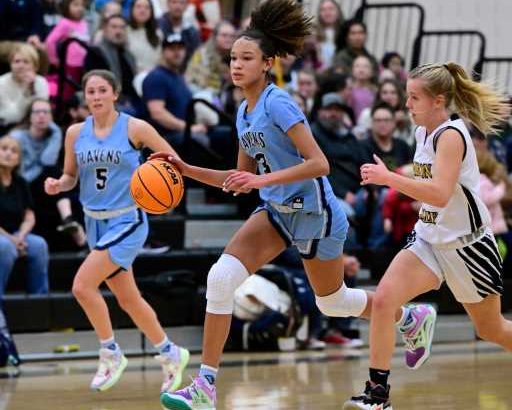 From Tanya Haave to Lauren Betts, and Shelly Pennefather, Ann Strother, Michaela Onyenwere and Fran Belibi in between, Colorado has a long history of producing nationally renowned girls’ basketball prospects.

It’s time to pencil in Bri Crittendon on that list.

The Riverdale Ridge freshman currently has 13 Division I offers, the majority of which came before she even played a high school game. She is on ESPN’s watchlist for the nation’s Top 25 players in the Class of 2026, is leading Colorado in scoring at 30.4 points per game, and is the main reason why the Thornton school is eyeing its school’s first girls’ state title.

“Bri is generational and she’s already on that list of blue-chip recruits,” Riverdale Ridge coach Tim Jones said. “She’s able to enhance and elevate the game, and she doesn’t even really realize she’s doing it. Not just for her team, but for other players — it’s already common for other players from other states to run up and ask to take pictures with her at tournaments.”

Crittendon, 6-foot-2, plays all five positions at various times, from running the point to posting up. She projects as a combo guard in college, and with her hops and height, she’s on track to being able to dunk soon. But Crittendon said she’s not thinking about college or buying too much into her own hype.

“I really am just a freshman, just out here playing basketball,” Crittendon said. “I really don’t worry about the offers or the haters. I just keep my head down and keep working and grinding, chasing my dreams that I’ve had since I was a little kid. All I’m worried about is playing and this love that I have for this game.”

The offers keep pouring in, including from UCLA and Ohio State this past week and Louisville two weeks ago. It’s only a matter of time before other powerhouses such as UConn, Stanford, and South Carolina also make their interest official.

In the meantime, Crittendon’s been focusing on her midrange and 3-point game after spending most of her younger years playing in the paint. Her trainer, Jody Hollins, said she has the intangibles to pair with her work ethic.

“There’s a certain level of confidence that the kids who are those kids have, and she’s got it, just like Michaela had it, Lauren had it,” said Hollins, who has worked with Crittendon since elementary school. “She’s super poised, very mature for her age. Division I coaches, after talking to her on the phone, are astounded because she’s just very comfortable and knows what she wants. At 15, she already has a plan of what she wants to do, what she wants to accomplish, who she wants to be.”

Crittendon wants to eventually get involved with Team USA during high school, as Onyenwere, Belibi and Betts all did. Her ultimate aspiration is to play in the WNBA, while also running her own business related to basketball.

Those lofty goals are certainly achievable, said former Rockies utilityman Terry Shumpert, who has coached Crittendon on the club scene with Colorado Lockdown Elite since she was in fourth grade. At that time, Crittendon had already shown promise while playing on a competitive boys’ team in first and second grade. When Shumpert first saw her play, he knew then what college coaches everywhere are finding out now.

“I said, ‘We have to go get her on our team,’” recalled Shumpert, who is currently an assistant girls’ basketball coach at Highlands Ranch. “I went over and pitched (her dad) immediately. I told him I’ve been around a bunch of professional athletes in my life, and I knew how to spot them early.

“I told him then, ‘Your daughter is really talented.’ He might’ve been like, ‘Oh you’re talking about a fourth-grader Shump, what are you talking about?’ But I said to him, ‘That’s what I’m talking about. She’s the real deal.’…  I’d be very surprised if Bri isn’t as good as a sophomore as Michaela was as a senior.”

Crittendon’s rapid improvement makes the Ravens (8-1, No. 3 in Class 4A in the latest CHSAANow rankings) a bonafide title contender. As Crittendon takes on more of a leadership role — “If you make a mistake she lifts you up,” sophomore Gabby Herr explained — Riverdale Ridge figures to become a force down the stretch, despite only having one senior.

“The best thing about Bri is she handles success well,” Jones said. “A lot of kids when they see that kind of success early on, and they find people telling them they’re great, they use that as a distraction as opposed to something to push them. She’s inspired by that (hype) — she’s motivated by it.”

Want more sports news? Sign up for the Sports Omelette to get all our analysis on Denver’s teams.