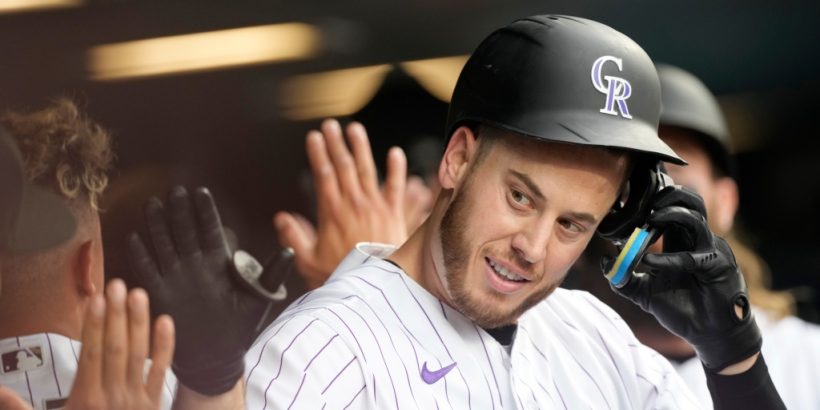 Hey Larry, Vinny, Dante, Ellis and Big Cat, meet C.J. Cron. Back in the day, he would have fit in quite nicely with the Blake Street Bombers.

Simply put, the guy’s a beast at the ballpark at 20th and Blake.

Cron hit two home runs and a single and drove in five runs Friday night in the Rockies’  10-4 win over the Padres at Coors in front of 34,304 fans. Cron is hitting .355 at home and 12 of his 16 homers have been launched in LoDo.

And check out this stat: Of any Rockies player who has played at least 100 games in Colorado, he’s got the best home run ratio. He’s hitting one home run for every 12.72 at-bats. Andres Galarraga ranks second at 13.61.

The Rockies snapped their seven-game home losing streak. The Padres, batting the Dodgers for the National League West title, have lost eight consecutive games at Coors, their longest active streak of futility at one ballpark.

Cron’s first homer was a two-run shot to right in the first inning off rookie left-hander MacKenzie Gore. It traveled a mere 399 feet. His second dinger, a two-run blast in the fifth, again off Gore, was tape-measure worthy. It traveled 486 feet and almost made the concourse in left field.

On a hot, dry night when the ball was jumping — the teams combined for 22 hits and four homers — Colorado needed Cron’s firepower. It also needed a gutsy, seven-inning performance from Kyle Freeland.

The left-hander pitched four scoreless innings before San Diego teed off for four runs in the fifth. The Padres’ big inning included a leadoff homer by Trent Grisham, a triple by Jose Azocar and RBI doubles by Manny Machado and Luke Voit.

Colorado’s offense, which is waiting for the return of slugging outfielder Kris Bryant next weekend at Minnesota, ripped off 14 hits. Charlie Blackmon, hitting third in the order, went 3-for-4 with two RBIs. His RBI triple in the first inning gave him 54 in his career, moving him past Dexter Fowler as the franchise’s all-time triples king.

Randal Grichuk also had a big night, hitting 2-for-4 and launching a three-run homer in the fourth to give the Rockies a 6-0 lead. The homer, his sixth, was Grichuk’s first in a month — a drought of 90 at-bats.

The two teams hook up again Saturday night at Coors.