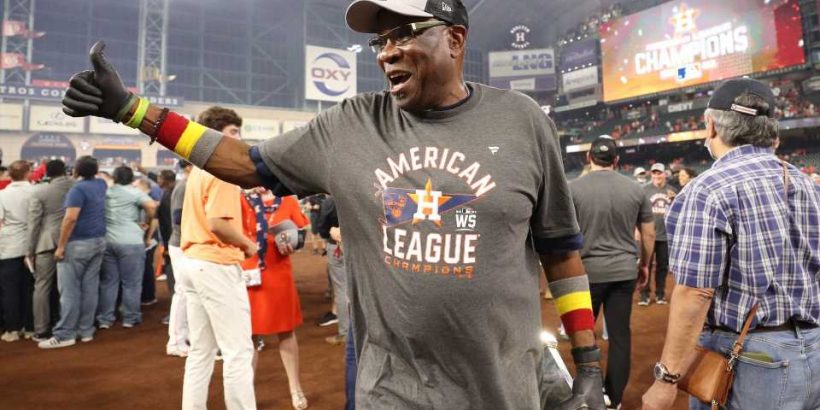 Baker is now in his 24th season as an MLB manager with his fifth different team. Sporting News breaks down his impressive managerial career.

Baker has guided his teams to eight division titles across his career — at least one with each team — and he has reached the postseason 11 times. He is the only manager to win a division with five different teams.

He collectively owns a record of 38-40 in the postseason.

Yet, despite his long history of success, a World Series ring has eluded him to this point. Baker’s closest chance came back in 2002 when he guided the Giants to the National League pennant.

Baker and the Giants got off to a 3-2 lead in the series, but the Angels won the last two games of the series at Edison International Field of Anaheim to claim the World Series title. He led the Cubs to their first postseason series win since 1908 in 2003 when the team beat the Braves in the 2003 NLDS, but they fell the next round in the NLCS to the Marlins.

With Cincinnati, he took the Reds to the postseason three times, with the team winning their first division title since 1995 coming in 2010. After a six-year stint with them that ended following the 2013 season, Baker was brought on by the Nationals in 2016, and he led them to a pair of division titles before being let go after the 2017 season.

Baker was most recently hired in 2020 after the Astros fired manager A.J. Hinch for his tenure during which the Astros were caught in a sign-stealing scandal. He led Houston to the postseason in 2020 and guided them to the ALCS, but they fell short against the Rays. In 2021, the Astros finished with the second-best record in the American League and won the pennant. He is the ninth manager to reach the World Series from both the American League and National League side.

The 19 years between World Series appearances is the second longest behind only Bucky Harris, who first managed a World Series team in 1925 and then again in 1947, according to MLB’s Sarah Langs and the Elias Sports Bureau.

Where does Baker rank among managerial wins?

Baker has found immense success at each destination. In his 24 seasons as a manager, only nine times has his team finished with a sub-.500 record — one of those teams, the 2020 Astros, still reached the ALCS.

At 1,987, he has the most wins of any manager that hasn’t won the World Series.