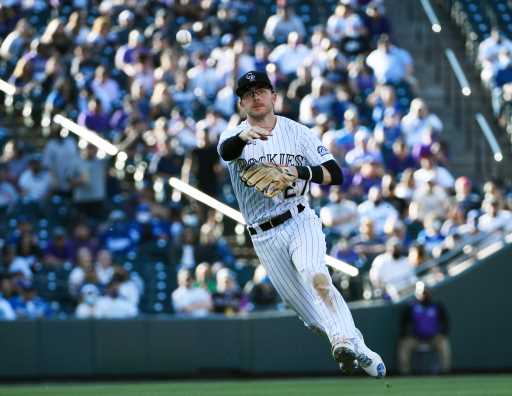 On Aug. 28 of last season, San Diego Padres outfielder Trent Grisham hit a screaming line drive toward right-center field. Rockies shortstop Trevor Story, in a shift behind second base, sprinted toward the gap, leaped and pulled the ball down.

“When he jumped and made that catch, he looked like an Air Jordan poster,” Bobby Stroupe said.

For Stroupe, the founder and president of Athletic Performance Enhancement Centers (APEC) in Fort Worth and Tyler, Texas, that moment was simply confirmation of something he already knew — that Story is one of the best all-around athletes in Major League Baseball.

“He’s a dude,” Stroupe said, going so far as the say that the 6-foot-2, 210-pound Story shares the same size, weight, strength and explosiveness as NFL running back Adrian Peterson.

* His step-to-vertical leap of 41.8 inches would rank in the top 5% of an NBA combine, according to Stroupe.

And then there is Story’s bat speed and power. On Sept. 5, 2018, Story hit three home runs against San Francisco at Coors Field, including a 505-foot blast that officially ranks as the longest in the ballpark’s history. The record-setting home run had an exit velocity of 111.9 mph.

Put all of that athleticism together and Stoupe firmly believes Story has what it takes to hit 40 home runs and steal 40 bases in a season. How rare an accomplishment would that be? It’s only been done four times in major league history and it hasn’t happened since Alfonso Soriano hit 46 homers and stole 41 bases for the 2006 Washington Nationals.

“Trevor has some very unique physical characteristics that can make that possible for him,” Stoupe said. “His running velocity, acceleration and rotational strength are special. You combine that with his acumen in baseball, along with his mental and professional makeup, and 40-40 is a realistic goal for him.”

Story hasn’t set the bar that high, at least not publicly, but he does have a pretty lofty goal. On the first day of spring training, he said he wanted to become a 30-30 man. The last Rockies player to do that was Hall of Famer outfielder Larry Walker in his 1997 MVP season when he mashed 49 homers and swiped 33 bases.

“I felt like I was on a good pace last year,” Story said of the pandemic-shortened 60-game season. “Obviously, we didn’t play enough games, but it’s always been on my radar to hit 30 and steal 30.”

Story and Stroup first met in 2017, and Story began training at APEC in Fort Worth in 2019. The goal was to optimize Story’s natural athleticism, making him faster, quicker, stronger and more powerful, all tailored toward making Story a better baseball player.

Stroupe is not a baseball coach, so he doesn’t necessarily focus on swing mechanics or fielding. Rather, Stroupe, a registered strength and conditioning coach with the National Strength and Conditioning Association, works on teaching athletes how to move more efficiently and how to turn strength into speed and power.

Story wrapped his arms around Stroupe’s concepts, and it’s paying off.

“I’m trying to make everything as efficient as I can. Back home in Texas, at APEX, I practiced a lot on first-step quickness and mechanics. I don’t want any false moves there.”

That not only helps him on the basepaths but also in the infield. Story’s patented play — in which bolts to his left, scoops up a groundball near second base, does a 360-degree pirouette and fires a strike to first base — does not come by happenstance.

Story, however, committed 10 errors in 57 games at short last year and was not happy with his career-low .961 fielding percentage — a number that might have cost him a shot at his first Gold Glove. One of his goals at APEC was to fix his footwork to eliminate off-target throws.

To that end, Story huddled with Stroupe and Brandon Sherard — Story’s hitting-and-infield coach, confidant and close friend for more than a decade.

“The three of us got together and we went back and looked at some things,” Stroupe said. “We implemented some of the same things I did with Patrick (Mahomes). We worked on motion throws.

“You don’t want this fluid, explosive upper body and then have your feet look like they are disconnected. When the ball sailed on Trevor last year, what it looked like, to me, was robotic feet and a fluid upper body.”

By the time spring training arrived, Story’s arm and feet were working in concert.

The two-time all-star shortstop is scheduled to become a free agent after this season, so he’s in line for a substantial jackpot. But he’ll also likely have to compete with Carlos Correa, Corey Seager and Javy Baez as part of a glittering class of pending free-agent shortstops.

Earlier this year, the MLB Network aired the “Top 10 Players Right Now” for each position and Story checked in at No. 1, ahead of Boston’s Xander Bogaerts, Francisco Lindor of the New York Mets and San Diego’s Fernando Tatis Jr., who signed a 14-year, $340 million contract extension this spring.

“That felt good,” Story said of his being crowned as the game’s top shortstop. “But I’ve never been motivated by anything other than myself or my own thoughts. I really try to make it about myself and how I can improve my game each year.”

For Story, that means spending his offseason taking his body to the highest level possible.