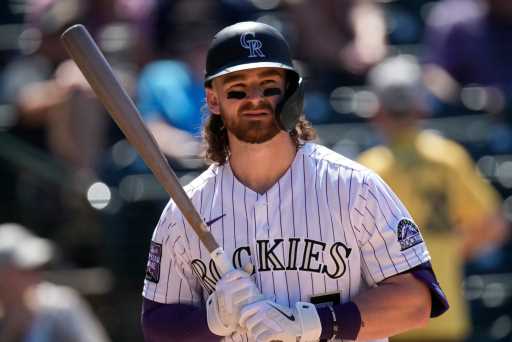 All signs point to Rockies all-star shortstop Trevor Story leaving Colorado, either via a trade in July or as a free agent after the season.

That means that Brendan Rodgers is on deck. He sounds like he’s ready for the challenge.

“I do feel a lot more comfortable and confident in the box and on the field,” Rodgers, 24, said Thursday before the Rockies played the Marlins at Miami. “That’s not to say I wasn’t confident (before), but I’ve really concentrated on taking care of my body. It’s starting to pay off, especially after a tough hamstring injury.”

Story, who was suffering from right elbow inflammation, came off the injured list Thursday. Rodgers, who played at shortstop in seven games during Story’s absence, was not in the starting lineup, and now he will have to find playing time at second base and shortstop, at least until Story departs.

“Honestly, I’ve been playing both since Double-A, and I feel confident at both,” said Rodgers, who’s hitting .250 (12-for-48) with one home run and eight RBIs.

Entering Thursday, he’d hit safely in eight of 16 games since being reinstated from the injured list on May 21. He strained his hamstring during spring training.

“I think I will start tapping into my power a little bit more,” Rodgers said when asked what his next step will be. “It was a huge weight off my shoulders when I hit that first (career) home run. I feel more comfortable in the box and I’m just going to keep trying to have longer at-bats, but still stay aggressive.”

“Overall, I thought he did a nice job at shortstop,” Black said. “There were a couple of times when he had to start a double play on hard-hit balls — and he did.”

“He’s holding his own,” Black said. “Each and every day that he’s out there — gets a start, and gets a hit here and there — it’s only going to help him. I think he’s going to hit.”

Injury updates. Right-hander Jon Gray continues to make progress from his right flexor strain. He played catch from about 90 feet Thursday in Miami and Black said that Gray will increase the intensity of his throwing program this weekend in Cincinnati. There is no timetable for Gray’s return.

Right-hander reliever Jordan Sheffield (right lat/shoulder strain) will likely be back this season, Black said, but it’s probably more than two months away. Sheffield will undergo more tests in about five or six weeks.

Freeland has not been sharp since returning from his strained shoulder and he’s been running up high pitch counts. He’s coming off a loss to Oakland last Saturday when he gave up five runs on 10 hits across five innings. Freeland served up a two-run homer to Matt Olson in the first inning at Coors Field and Chad Pinder hammered a solo homer in the third. In four career starts vs. Cincinnati, Freeland is 2-1 with a 7.06 ERA. Mahle has won three consecutive games for the first time in his career, posting a 1.04 ERA over those three games. In his last outing, Mahle allowed no runs on just one hit and one walk over five scoreless innings. He struck out eight en route to a win over the Cubs. In four starts at Great American Ball Park, he’s 1-1 with a 7.23 ERA. In four career starts vs. Colorado, he’s 0-1 with a 5.91 ERA.