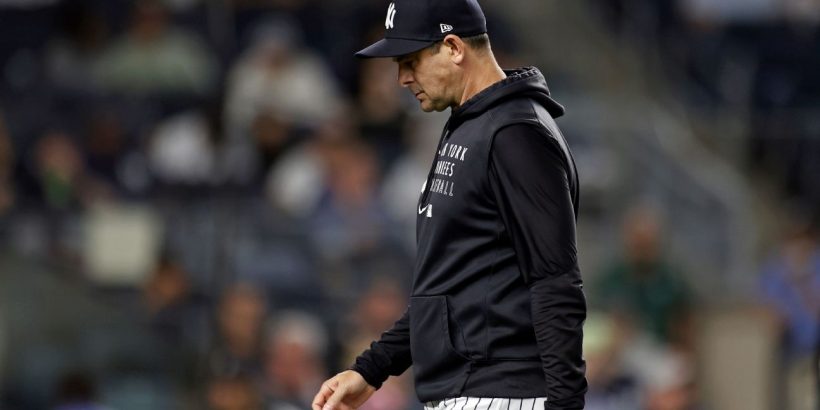 NEW YORK — The Blue Jays gave the Yankees a Bronx battering this week they haven’t experienced in nearly 100 years.

They also pulled within a half-game of New York for the final AL wild card on Thursday night with a 6-4 win that capped a four-game sweep.

“It’s not easy to come and be relaxed at Yankee Stadium,” manager Charlie Montoyo said. “And they did for four games.”

The Yankees never had a lead during the series, the first time that’s happened to them in a series of four games or more since 1924 against the Washington Senators, according to Elias Sports Bureau. The Yankees had played 1,250 series of four or more games while having the lead at least once before Thursday night.

“We just had a horrible homestand,” Yankees manager Aaron Boone said. “It’s not OK. … But we’ve been through this throughout the season. We’re up against it again. We look forward to going out and turning this around tomorrow. We know it can turn just as quick as it’s gone sideways here.”

Bo Bichette thumped a leadoff homer in the first inning and singled in the tiebreaking run in the seventh, and Vladimir Guerrero Jr. hit his 42nd homer to help complete Toronto’s first four-game sweep in the Bronx since 2003. The Blue Jays have now won eight straight, their longest winning streak since an 11-game spurt in 2015.

The Yankees, meanwhile, have lost six straight and 10 of 12, a jarring collapse immediately following a 13-game winning streak that propelled them to the top of the wild-card race. They fell a game behind idle Boston for the lead spot.

Jose Berríos (11-7) dominated the Yankees until Anthony Rizzo’s two-run homer in the sixth tied it at 2. The right-hander got two outs in the seventh before being pulled after 109 pitches. He was charged with two runs and struck out eight.

Bichette got the first of his three hits with his 22nd homer to begin the game. Guerrero’s solo shot off Andrew Heaney in the ninth made it 5-2. The 22-year-old Guerrero matched Kansas City’s Salvador Perez for second in the majors behind Angels two-way star Shohei Ohtani, who has 43 homers.

The Blue Jays played the entire 60-game 2020 regular season and the first half of this year splitting home games between their spring training complex in Dunedin, Florida, and their Triple-A park in Buffalo, New York, due to Canada’s coronavirus protocols. They finally returned to Rogers Centre in late July, but all of that discomfort served to harden the Jays to the rigors of play on the road, according to Montoyo.

“They never complain, and that’s why we’re in this spot right now,” he said. “It’s been impressive what our team has done. I’m so proud of our team, it’s a happy night for us.”

Information from The Associated Press was used in this story.