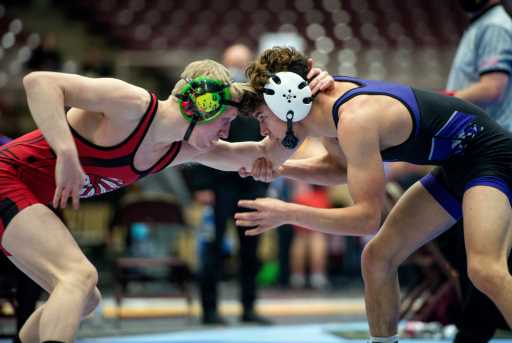 PUEBLO — A new first family of Colorado high school wrestling has been crowned with Loveland’s Kobi and Morgan Johnson becoming the first brother and sister to win state championships in the same year.

“We’ve both been wrestling since we were 6 years old,” Kobi Johnson said. “We’ve been partners with each other the whole time and both have helped each other out.”

Morgan Johnson added: “It’s really exciting. … We mess around and get to wrestle each other at practice. Growing up, we have always been best friends. It’s just cool.”

Loveland coach Troy Lussenhoop has fully embraced the sibling success within his program.

“They both honestly just came in as hammers from day one,” Lussenhoop said. “They beat each other up. They beat other kids up in the room. They’re just tough and good at what they do. They’ve been doing it their whole lives.

“They’re two opposite styles, which is kind of cool. Kobi is just a little box of power. He’s fast, he’s strong and he’s quick. Then you’ve got Morgan on the other side, who is tall, long, really technical and more methodical. … If Kobi can’t turn you on top, he’ll let you go, and take you down. Morgan wants to get on top and just hammer you.”

The Johnson sibling’s father, Luke, was in attendance at Southwest Motors Arena in Pueblo to watch his kids make Colorado prep sports history.

“I’m proud of them. They worked hard and got good coaching. I just sit back and watch,” Luke Johnson said. “They push each other in that way. They want to out-do each other. But they are each other’s biggest supporters. They help each other. She’s going to start training for the world team in May. He’s basically going to take the offseason to help her get ready for that.

“As a parent, and all the work that we put in, these four years that they have in high school is what it’s all about.”