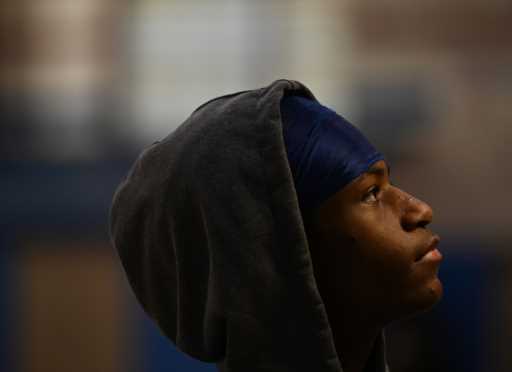 Give Jordan Reed a blank canvas, he’ll fill it from his heart.

“You can really build whatever you want,” the senior guard from Manual High explained. “Once you understand that, your options are never limited. You could build buildings, houses — really, anything. That’s what was fun to me.”

Whether he’s got a basketball or a pencil in his hand, Reed doesn’t see limitations. He sees opportunities. Windows. Statements.

As a junior, the 6-foot-4 creator played the point, on the wing and even some at small forward for a Thunderbolts squad that went 12-4 in 2020-‘21, 8-1 in league play and fell to Lutheran, the eventual Class 3A champs, in the Great Eight.

Along the way, Reed built one mother of a season stat line, averaging 18.8 points, 7.1 assists and 6.6 rebounds per game. He posted two triple-doubles and four double-doubles. Over the last two seasons, the Manual star has finished either one board or one assist shy of a double-double in five other tilts.

“We kind of talk about Jason Kidd, Magic Johnson, Oscar Robertson, about being a great rebounding guard,” Manual coach Omar Henry said of Reed. “He’s kind of big for his size. I always say, ‘You’re bigger than most guys. Just out-jump them.’”

This winter, he’s planning on out-muscling them, too. After playing last season at close to 190 pounds, he’s over 200 now. And over the last year, Reed’s added almost 100 pounds to his squat — it’s in the 325-ish range — along with nearly seven pounds of muscle. He spent five days a week over the summer in the weight room with the football staff, trying to put on bulk without sacrificing the quick-twitch stuff.

“He’s always been able to shoot the ball.” Henry said. “Now he’s added being a high-riser to his game. I think that’s probably going to open up a little bit more of what he does.”

Score. Facilitate. Crash. Harass. Fly. Reed, a silky left-hander, is one of those hoops artisans who patterns his game after Ja Morant. James Harden, too. Only with a twist.

So no, the kid has been never shy on confidence. Or afraid of the big stage. Reed grew up as one of those classic, tag-along little brothers, following around and playing against his elder sibling, Jaedon, another former Manual stalwart who’s now a sophomore forward at Laramie County Community College.

“He definitely bullied me all the time,” Reed said with a laugh. “But he just wanted to see me get better.

“Learning how to finish over bigger people made it easier for me when I played with kids my own age — which I didn’t get to do for a long time. I’ve always played up.”

He’s stepped up, too. In the Thunderbolts’ playoff opener against Highland, Reed dropped 15 points and six assists. In the Great Eight loss, he put up 16 points and four dimes against a Lutheran roster that featured big man Baye Fall.

“This is a special kid,” said Jermaine Mason, the former Denver East and CSU-Pueblo point guard who’s now an assistant coach at Manual. “Jumps well. Just deceptively quick. Long arms. Gets his hands on a lot of things.”

Mason, who grew up playing against the likes of Chauncey Billups, said Reed’s game reminds him a bit of former CU Buffs sharpshooter Stevie Wise.

“He was another lefty,” Mason said. “Stevie was a great shooter, and Jordan, he can really light it up.”

While their games are different, Mason noted, his and Reed’s demeanors are perfectly matched. And perfectly quiet.

“Jordan doesn’t talk a lot. He’s kind of like me,” Mason said. “It’s weird … we can have a workout and not say that many words. If we had a 30-minute workout, we might get about 20 words out.”

And those words stick. Reed’s Twitter feed was silent as of last Wednesday morning, but the banner picture on his account spoke volumes. It was a shot of Magic Johnson in Lakers gold, ball in his right hand, guarded by Michael Jordan.

“My goal is to get eight (points) per quarter. And that (will) help me be able to know I’m at least close to getting that 30.”