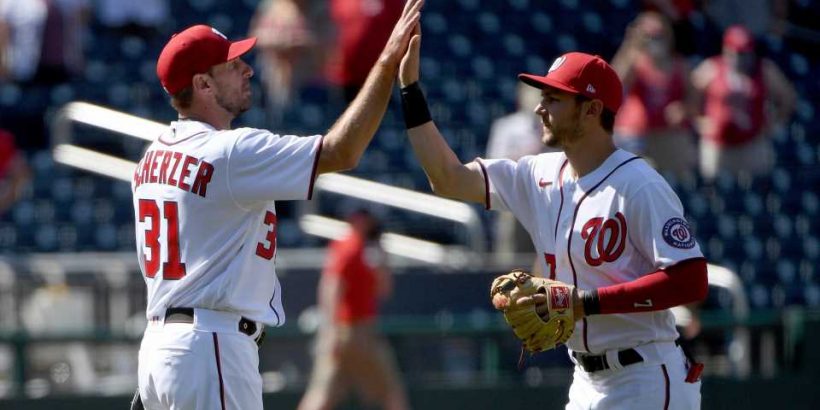 Once again, the Dodgers’ rotation looks damn near unfair.

Though the deal is not yet finalized, all reports and indications are that the massive blockbuster between the Nationals and Dodgers will become official soon. In this baseball-shaking agreement, the Dodgers acquire Max Scherzer and Trea Turner from the Nationals in exchange for four prospects, headlines by Keibert Ruiz and Josiah Gray.

In case you’re counting, the Dodgers now are lined up to have two three-time Cy Young winners in their October rotation. Max Scherzer won the AL award in 2013 and the NL award in 2016-17. Clayton Kershaw, who is currently on the IL but expected back at some point before the postseason, won the NL Cy Young in 2011 and 2013-14.

Both are in their 30s, but both are still elite. Scherzer started the All-Star Game for the National League — a decision made by L.A. manager Dave Roberts — and Kershaw had a 3.39 ERA/2.98 FIP with 10.7 K/9 in 18 starts before hitting the IL.

At the beginning of the season, Kershaw was in a rotation with Walker Buehler, Trevor Bauer, Dustin May and Julio Urias. May lasted just five starts before requiring Tommy John surgery, Kershaw’s on the IL and Bauer is on administrative leave as he faces sexual assault allegations. Only Buehler and Urias have stayed healthy.

“We had an incredible amount of pitching, and now they’re all hurt,” Max Muncy told Sporting News during the All-Star events in Colorado. “Now we need starting pitching again, which is crazy to say. We’re going to have to find a way to move forward, and we’ll get there.

“We’re not worried at all. Look where we’re at now. We have the second-best record in baseball and we haven’t had our full team but for maybe one game all year.”

Now, Scherzer — who is a free agent after the season — joins the mix, with Kershaw back eventually and Tony Gonsolin throwing quite well (2.38) in his 34 innings this season, covering nine games (eight starts).

Imagine trying to win a playoff series against the Dodgers when they’re throwing Scherzer, Buehler and Kershaw or Urias in the first three games. Yikes.

If you read any little part of the intro instead of skipping ahead to the grade, this doesn’t surprise you. Yes, the costs are steep — financial and prospect costs — but the Dodgers have plenty of both. Any money they fork over to luxury tax penalties will be made back with their October run to what would be a second consecutive World Series title.

And this is why teams collect as much young talent as possible, to be able to make a move like this without devastating a farm system. The Dodgers’ system isn’t as highly rated as in recent years — it was No. 9 in Baseball America’s preseason rankings — but that’s mostly because so many of their top prospects are now making an impact in the big leagues, either with the Dodgers or with other clubs. And it’s absolutely worth noting that the two primary pieces heading to D.C. were acquired not in the draft, but in other trades in years past.

Lots has gone wrong for the Dodgers this year, despite what their record might say. We talked about the rotation issues, but don’t forget that shortstop Corey Seager has only played 37 games, Cody Bellinger has only played 45 (and struggled massively when in the lineup) and Mookie Betts has spent a couple of weeks on the IL, too. Still, they’ve persevered.

Now, they add Scherzer to the rotation and Turner to the lineup. We haven’t even talked about the outstanding season Turner is having — recent COVID positive test notwithstanding. He’s in his Age 28 season and playing like an MVP candidate. In 96 games, he has 18 homers, 21 stolen bases, a .322/.369/.521 slash line, a 146 OPS+ and a 4.1 bWAR. He’ll man shortstop until Seager returns, then shift over to second base, allowing Chris Taylor — who’s having an outstanding year himself — to be that play-everywhere starter.

Turner has one more year of arbitration and then is eligible to become a free agent after the 2022 season. That gives the Dodgers a little security if Seager leaves as a free agent this offseason, though it seems like the club will try to retain his services long-term.

Look, we won’t know the return for a few years, but the Nationals got a pair of prospects who scouts love in Ruiz and Gray. Ruiz is ranked No. 1 in the Dodgers system by Baseball America and No. 16 in baseball. He’s a switch-hitting catcher who would be in the majors already with most any other team, but the Dodgers have a rock-solid tandem already in Will Smith and Austin Barnes. Ruiz, who just turned 23 on July 20, is batting .311 with a 1.012 OPS, 16 homers and 45 RBIs in 52 games with Triple-A Oklahoma City.

Gray is ranked as the No. 42 prospect in baseball by MLB.com. Here’s what they wrote about the former shortstop-turned-pitcher who has a 2.87 ERA with 22 strikeouts in 15 2/3 innings at Oklahoma City so far this year.

Hitters have difficulty catching up to Gray’s 92-97 mph fastball, which seems to explode at the plate with riding and rising life. He sharpened both of his breaking balls at the alternate training site, tightening up and adding some power to his mid-80s slider while improving his feel for his upper-70s curveball. His changeup is more of a work in progress because he didn’t use it much in college, and it features some sink but gets too firm at times.

The other two prospects are Gerardo Carrillo, a right-hander pitcher, and Donovan Casey, an outfielder. Carrillo ranks No. 22 in the Dodgers’ system, according to Baseball America. Casey isn’t ranked on that list, but he has a cannon in the outfield.

Again, time will tell, but to land two premium prospects — and two other solid ones — for a pitcher who wasn’t going to be around next year and a shortstop who wasn’t in the long-term plans feels like a decent return. A few more along the lines of Casey and Carrillo would have bumped it to an A, but that’s probably just being picky.