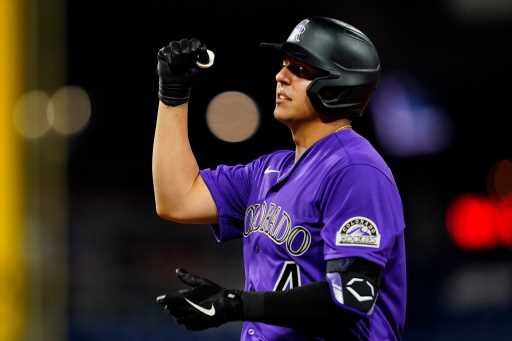 LOS ANGELES — Colton Welker’s difficult journey to the majors has run into another detour.

The Rockies announced on Wednesday that Welker was designated for assignment.  The move cleared a spot on the 40-man roster for right-hander José Ureña, who was selected onto the active roster and was scheduled to start Wednesday night’s game against the Dodgers.

Welker, 24, underwent season-ending surgery on his right shoulder on June 1 to repair a torn labrum.

“These are hard decisions for an organization, but we felt that where Colton is right now, at this part of his career, this move probably made the most sense, as opposed to somebody else,” manager Bud Black said.

In May of 2021, Welker was suspended for 80 games without pay by Major League Baseball after testing positive for Dehydrochlormethyltestosterone (DHCMT), a performance-enhancing substance. The suspension limited him to just 23 games with Triple-A Albuquerque.

The Rockies promoted him from Albuquerque late last season and he made his major league debut on Sept. 8 as a pinch hitter in the eighth inning, flying out. He hit 7-for-37 (.189) in 19 games for the Rockies.

Welker, a fourth-round draft pick in 2016 out of Stoneman Douglas High School in Parkland, Fla., flashed a lot of potential during his early pro career in the Rockies organization. He was named a mid-season all-star for Double-A Hartford in 2019.

Welker was optioned to Triple-A to begin the 2022 season but had just 45 plate appearances in 23 games before he went on the injured list.

Colorado could have recalled Welker and placed him on the major league 60-day IL, but doing so would’ve required paying him at the prorated major league minimum salary for the rest of the year (about $350,000). Colorado instead elected to take him off the 40-man roster and risk losing him to another club.

Injured players cannot be outrighted, so the Rockies have a week to trade Welker or release him. The Rockies will likely release Welker, meaning that 29 other teams would have a chance to sign him off waivers. If Welker passes through waivers unclaimed, the Rockies would have the chance to re-sign him to a minor-league deal.