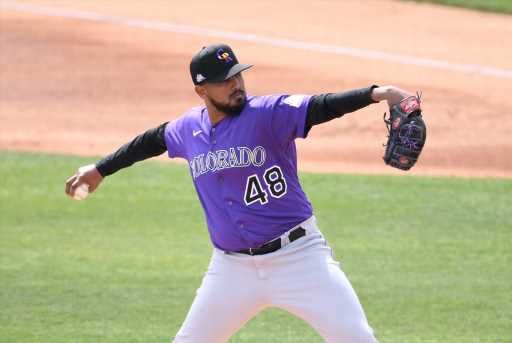 Rockies pitcher German Marquez began spring training with the goal of regaining his fastball command to round out his immense talents.

Call it a work in progress.

Marquez, in his fourth exhibition start Monday, allowed three runs over five innings pitched in a 5-4 Rockies win against Texas at Salt River Fields. Marquez gave up his first home run of spring — to infielder Nick Solak in the fourth — plus a pair of RBI doubles.

Marquez told reporters that “everything was up” as he continues to tweak his approach.

“I’m trying to find that point in my delivery,” Marquez said. “I think I’m getting closer.”

Rockies manager Bud Black has not named an opening day starter. However, all signs point to Marquez earning the distinction for a second consecutive season. He went 4-6 last year with a 3.75 ERA.

Black explained what will go into his decision in naming an opening day starter.

“What you’ve done in the past, your place on the team, your experience, and your ability to handle opening day with poise,” Black said. “It’s a feather in the cap to be named an opening day starter. I think with German, and along with a few of our guys, (they) have done enough to warrant that nod. … It’s a little bit about who you are and your place in the game.”

Marquez, 26, is expected to make one more exhibition start before the Rockies return to Coors Field.

“When he’s on the mound he’s carrying himself like he has his best stuff,” infielder Ryan McMahon said. “That’s what I and all his teammates appreciate about him. He’s a bulldog and he’s going out there to compete.”

Marquez has the potential to become among the most feared pitchers in the National League. But one big thing must improve.

“His challenge is trying to perfect the control and command of his fastball,” Black said. “I think that’s where most of the focus is on German … and the developing use of the slider to help him offset some left-handed hitters.”