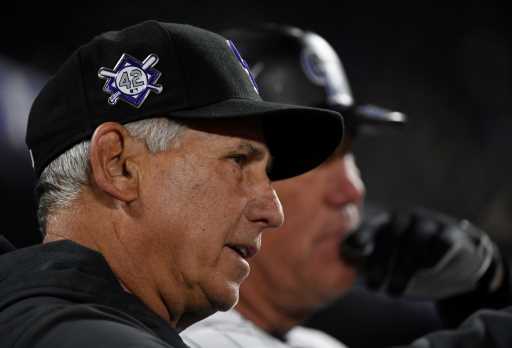 Pose a Rockies — or MLB — related question for the Rockies Mailbag.
Note: We have two questions relating to manager Bud Black’s status with the Rockies.

First of all, we all love Buddy (Black) and I had hoped after a pretty good April that the Rockies might be relevant in September. Well, we all know what has happened and thus my question. Do you think it’s time for a change yet? I do. After several years of mediocrity, I think some new energy in leadership could help. We’ve seen a couple of once-great managers, Joe (Girardi) and Joe (Maddon), already fired in other cities.

Is Bud Black in danger of losing his job?

First of all, I do not think Black’s job is in jeopardy.

During spring training, he signed a one-year contract extension that will take him through the 2023 season. The Rockies don’t fire managers during the season very often. The last time it happened was in May 2009 when Clint Hurdle was fired and replaced by Jim Tracy. That team was underperforming and Tracy’s fresh presence in the clubhouse helped the ’09 team make the playoffs.

The ’09 team had begun to tune out Hurdle. I don’t think that’s happening with Black. I’ve asked a number of key players, off the record, whether Black has “lost the team.” They all said no, adding that Black still has the players’ support.

In regard to the Angels firing Maddon and the Phillies firing Girardi, I don’t see the parallels to Black. The Phillies spent a lot of money — a $233 million payroll — and were expected to be contenders. Only the Mets, Dodgers and Yankees spent more than Philadelphia did on its payroll. The Phillies immediately got hot after Girardi was fired.

The Angels lost 12 games in a row under Maddon and were underperforming.

Finally, let me add something else. I believe firing Black would be a PR disaster for the Rockies. His ability to deal with the highs and lows of this team, both privately and publically, is important. And let’s face it, the Rockies are simply not that talented. What sense does it make to turn Black into a scapegoat?

Patrick, you wrote before that (Elias) Diaz was the Rockies’ answer at catcher. But last I looked he was hitting below the Mendoza line and wasn’t hitting any home runs. What’s going on?

Jeremy, you’re right, I did write a glowing story on Diaz during spring training.

This is what I wrote about Diaz, who slumped early last season before turning it around:

“Colorado’s patience paid off, for the club and the 31-year-old catcher. Diaz ended up hitting 18 home runs, the most by a Rockies catcher since Wilin Rosario’s 21 in 2013. His average climbed to .246 and he finished with an OPS+ of 96.

He was rewarded with a three-year, $14.5 million contract that covered his final season of arbitration eligibility and two years of free agency in 2023-24.

“Diaz did not make a significant mechanical adjustment at the plate when he was slumping. It was more about his mindset, not gripping the bat so tight, and becoming a more selective hitter. He stopped chasing so many breaking balls and stopped trying to pull the ball all of the time.”

Black recently said that Diaz had fallen back into those same habits. For the record, Diaz entered Tuesday night’s game hitting .204 with two home runs, a .547 OPS, and 11 RBIs. He was batting .154 (12-for-78) with one double, no home runs, and four RBIs in 23 games since May 4. He’s been one of Colorado’s biggest disappointments, for sure, especially considering the new contract the team gave him.

As I attend almost every home game, I have the same question repeating in my head. Why don’t the Rockies promote bunting when it seems like the smartest thing to do, to get a man on base, move players into scoring position, or even try to score from third base. Hampson seems to be the only player on the team who is either “permitted” to bunt, or has the skill to do so. Bunting would be especially useful to move the ghost runner in extra innings. Is whether or not to bunt the player’s decision or always a coaching decision?

Judy, I answered this question earlier this season. But I’ll build on my answer here.

First of all, Hampson is really the only player on the team who’s very adept at bunting, although Charlie Blackmon has put down some nice bunts this season.

Players do have the green light to bunt if they think they can surprise the opposing defense and get a single. Other times, a bunt is signaled from the bench or from third-base coach Stu Cole. It depends on the situation.

Here is part of what I wrote back in May:

“A lot of players simply don’t know how to bunt. They don’t practice it very often and it’s not taught much at the major-league level. The Rockies’ best bunter is utility player Garrett Hampson, but he’s a right-handed hitter. He learned how to bunt in college at Long Beach State where the skill was stressed.

“Second, a lot of players simply don’t think bunting is a particularly effective weapon. Back in 2018, Daniel Murphy (who played for Colorado in 2019 and ’20) explained in an ESPN article why he didn’t bunt:

“I haven’t really stolen bases for five or six years. If I drop a bunt down, what am I gonna do? I’m stuck at first base, so what I’ve done is ask our ballclub to get two more singles, or I’ve asked someone else to hit a double.

“If 7% of balls on the ground go for extra bases, someone is probably going to have to hit one in the air to score me from first. So what I’ve tried to do is hit a double every single time because it’s really difficult to get three hits.”

In other words, a lot of power hitters don’t think it makes sense for them to limit themselves to a bunt single with the hope that someone will drive them in.

Finally, and this is just my opinion, I think there is ego and era involved. Players in this day and age want to hit line drives, doubles, triples and home runs, not put down a bunt. They didn’t grow up with the bunt as part of the game.