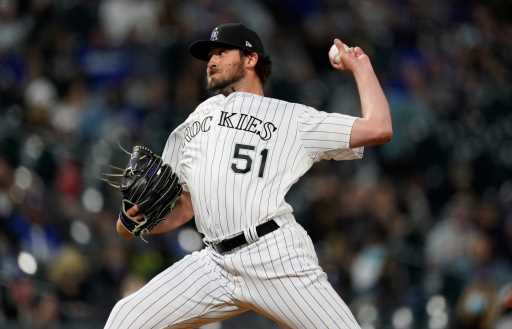 Rockies’ relievers Ben Bowden and Jordan Sheffield first met in 2014 as college freshmen at Vanderbilt with a shared vision of making it to the major leagues.

Their dreams became reality, together, at Coors Field. Bowden and Sheffield each made their MLB debut on Friday in a wacky 11-6 loss to the Los Angeles Dodgers.

“For us to be able to go out there and debut together, after coming in as freshmen in college together, is really something special,” Bowden told reporters on Saturday. “We had a good hug when he came off the mound.”

Bowden — a 6-foot-4 southpaw and second-round draft choice — faced significant adversity on his path to the Colorado bullpen. The 26-year-old Massachusetts native missed the 2017 season with a left shoulder injury and herniated disk. Lingering back issues held him out of the Rockies’ 2020 pandemic-shortened Rockies’ spring training.

Bowden, finally healthy, entered for Colorado in the sixth inning on Friday. After giving up a lead-off single to Corey Seager, Bowden settled in to sit down LA’s next three batters. Bowden recorded his first MLB strikeout against Corey Seager on four pitches.

Bowden proved less effective in the seventh allowing one earned run on two hits before getting pulled with one out.

“It was a little different feeling being out there than any game I’ve pitched before,” Bodwen said. “The first inning felt really good. The second inning … I didn’t start off exactly the way I wanted to.”

Sheffield — a right-hander acquired in ’20 from the Dodgers in the Rule 5 Draft — entered for Colorado in the ninth on Friday. He forced two ground-outs and a pop-out to end the side. On Saturday, Rockies manager Bud Black evaluated the performances of both Bowden and Sheffield.

“I thought they showed well,” Black said. “They came in and both of them threw strikes. You can tell that they were on the attack in the strike zone. I thought both guys’ stuff was their best stuff, as far as their pitch mix. … It looked like they were comfortable in their first big league appearances, which, a lot of times, you don’t see that. But those guys looked really confident and poised.”

Bowden told reporters that the baseball from his first strikeout will be authenticated and returned. Bowden did not hesitate when asked where it will be displayed.

“That is going to be up to my mom,” Bowden said. “I’m going to hand that to her, she’s going to take that, and she’s gonna put that somewhere safe.”

Gomber time. The biggest return in the Nolan Arenado trade is set to make his Rockies debut. Left-hander Austin Gomber will get the start on Sunday at Coors Field to close out the Dodgers series.

“I’m a better pitcher than I’ve been in the past,” Gomber said. “I think I’ve continued to learn and grow, physically and mentally. I’m getting over the point where you’re a young guy and just trying to establish yourself. I’m feeling established and wanted.

“It’s going to be exciting. I’m sure I’ll wake up tomorrow morning … and be ready to go.”