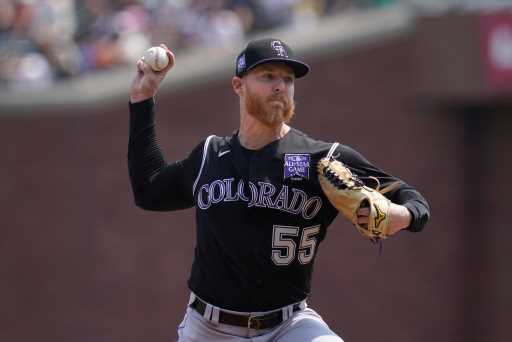 One of the most curious things about the Rockies’ curious season is this: At hitter-friendly Coors Field, their starters own a combined 3.57 ERA. On the road, starters have posted a 5.14 ERA.

Local knowledge. The Giants, who own the best record in the majors (76-42), have won eight of 10 games against the Rockies at Oracle Park this season.

San Francisco, obviously, is a much better team than Colorado (51-64). They also have the benefit of knowing the quirks of their home ballpark, where winds turn popups and flyballs into adventures.

The Rockies are learning about those quirks the hard way. Saturday night, first baseman C.J. Cron and second baseman Brendan Rodgers watched as a pop-up started in foul ground only to drift back into fair territory and plop behind them for a single.

Sunday, in the Giants’ seventh inning, Kris Bryant led off and hit what looked like a harmless flyball to left-center. But left fielder Connor Joe didn’t hear or see center fielder Garrett Hampson calling for the ball. The two collided, Joe dropped the ball for an error and the door opened for the Giants’ decisive two-run inning.

Manager Bud Black explained that Joe, thinking about the wind at Oracle Park, didn’t want to take his eye off the ball. Hampson, Black said, must yell louder.

“Connor probably didn’t realize — maybe it’s a lack of experience here at Oracle — that the ball seems to drift back toward the gap,” Black said. “It’s probably a learning experience for Connor. You’ve got to peek to see where the center fielder is.

“’Hampy,’ in his place as a center fielder — with this crowd — he’s got to yell, ‘I’ve got it.’ He might not have been as vocal as he needed. That’s something we’ll talk to Hampy about, especially in ballparks that have crowd involvement.”

Senzatela has been up and down all season. He suffered his ninth loss Wednesday at Houston, giving up three runs on nine hits over six innings. The right-hander is 2-3 with a 4.04 ERA in 11 starts at Coors Field this season. The Padres beat him on May 11 at Coors, scoring four runs in five innings in an 8-1 victory. Senzatela is 6-3 with a 3.13 ERA in 10 career starts vs. the Padres, including a 4-1 record with a 3.19 ERA in six starts at home. The Padres’ hopes of winning the National League West are fading, in large part because their starting rotation has faltered. Weathers, a 21-year-old rookie, illustrates their struggles. In 12 starts prior to the July 30 trade deadline, he never allowed five runs in a game. Since the deadline, however, he’s allowed at least six runs in three consecutive starts. He was clobbered by Miami in his last start at Petco Park, giving up three home runs, and six runs overall in 4 2/3 innings. In three games (two starts) against Colorado, Weathers is 0-1 with a 9.00 ERA.