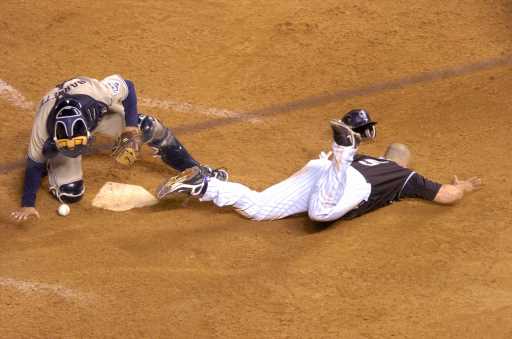 Even a cynical, jaded baseball beat writer needs a ray of sunshine now and then.

So, thanks, Denny Dressman, for your latest book: “Game 163: The Epic ’07 Wild Card Tiebreaker and the Rockies Team That Went to the World Series.” Amid all of the dour projections about the 2021 club (mine included), it’s nice to get up close and personal with one of the great moments in Colorado sports history.

There’s been so much written about the topsy-turvy game on Oct. 1, 2007, at Coors Field, but this book offers incredible detail and insight. I’ve long contended that if the game had involved the Yankees, Red Sox, Dodgers, Cubs, or heck, almost any other team, it would go down as one of the greatest games in baseball history. But it’s always been kind of a hidden gem, a regional game, cherished in Colorado and despised in San Diego, where they still believe Matt Holliday never touched home plate.

Dressman, of course, has a full chapter about Holliday’s “slide” for the ages. Dressman quotes Rockies third base coach Mike “Gags” Gallego as saying Holliday’s pinkie “nicked the plate.”

There is so much more to this book than the big moments every Rockies fan remembers about Game 163. And Dressman, a longtime journalist, is a fine writer and terrific reporter. His book “Eddie Robinson: … He Was the Martin Luther King of Football,” profiled the late Grambling football coach amid the turbulent civil rights movement of the 1960s. The biography was a Colorado Book Award finalist.

In “Game 163,” Dressen interviewed scores of people, resulting in enthralling behind-the-scene details. I covered the team during Rocktober and there are many things in the book I never knew. Or forgot.

For example, Garrett Atkins’ would-be two-run home run in the seventh inning was ruled a double by umpire Tim Tschida, even though Rockies fans seated in left-center were 100% positive the ball cleared the wall. The late Craig Sager, the TV reporter for TBS who was well-known for his outlandish attire, interviewed a fan named Inez Selby.

“Nobody had a better view,” Sagar reported from the stands. “Selby claims the ball cleared the yellow padding, hit the railing behind it and bounced back onto the field. … She’s convinced. But, of course, she could be a little biased. She’s been a season ticketholder for the last 14 years!”

Dressman also paints a poignant portrait of Padres Hall of Fame closer Trevor Hoffman, who blew a two-run lead in the 13th inning. Warren Miller, the Rockies’ media relations director from 2015-20, and the Padres’ media director in 2007, relays this story:

“My greatest memory of Trevor is from Game 163 in 2007. Seeing his passion for the Padres, his love for his teammates and his devastation over the loss, then seeing him handling each reporter’s question with the utmost class and professionalism ranks as my greatest sports memory.”

Dressman covers all the bases and deftly mixes anecdotes with backstories as he chronicles the game. There is a chapter on pitcher Josh Fogg, “The Dragon Slayer,” who started Game 163. How could there not be?

Dressman quotes manager Clint Hurdle, who says that Fogg’s secret was never getting caught up in the hype of outbattling aces from other teams.

“The Dragon Slayer never got caught up in the moment, either,” writes Dressman. “And what a moment it was: a packed house of 48,404 on a 73-degree early evening, and every fan who couldn’t get a ticket glued to the TV, following his every pitch …”

I have a home office jammed with baseball books, including several on the Rockies.  “Game 163” is now an indispensable part of my library.