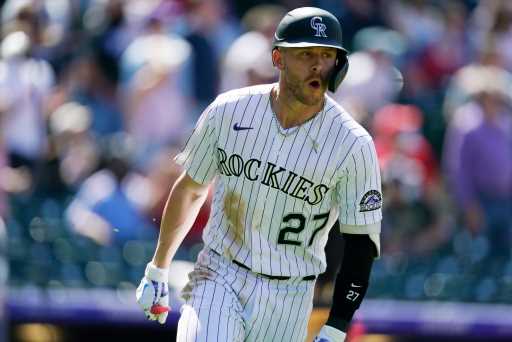 Here’s what I know, suspect and project as the Rockies hit the quarter pole of the 2021 season (statistics through Friday’s games):

* The Rockies are 13-10 at home and 2-14 on the road. At home, they can be a dangerous team (ask Reds lefty Wade Miley). On the road, they are the worst team in baseball.

* I’m sticking to my preseason projection. The Rockies won’t lose 100 games, but they will lose 92.

* As good as Ryan McMahon and Raimel Tapia played in the first quarter of the season, the Rockies’ MVP has been Trevor Story, and we haven’t seen him get really hot yet. Story’s .843 OPS and 121 OPS+ are the best among Rockies regulars.

* Jon Gray (4-3, 2.93 ERA) is pitching like an all-star. It would be very cool to see Gray — who’s turning out to be one of the best Coors Field pitchers in Rockies history — pitch for the National League on July 13.

* I still believe the Rockies will trade Gray before the end of July, but I wouldn’t be shocked if they attempt to sign him to a long-term deal. Emphasis on “attempt.”

* Story and the Rockies have not engaged in talks about a long-term deal to keep the shortstop in Colorado. I don’t think they will. I would not be shocked if Story is reunited with DJ LeMahieu in New York as a member of the Yankees.

* The most troubling stats thus far for the Rockies? They come out of the bullpen. Their relievers have the highest ERA in the NL (5.74), highest WHIP (1.60) and have given up the second-most home runs (24). The bullpen has allowed 44% of inherited runners to score, the second-highest percentage in the NL.

* Fans often complain that the Rockies strike out far too much. The truth is, however, their 22.9% strikeout rate is the fifth-lowest in the NL. That’s good news. The bad news? Colorado’s 8.4% walk rate is the 12th lowest. Not good.

* Outfielder Yonathan Daza has always been known for his solid fielding, but he carried a .318 average through the minors. But there was, apparently, a belief in the organization that Daza might not be effective against big-league pitching. But the 27-year-old outfielder is proving himself big-league worthy. Entering Saturday, he was hitting .337 with one homer and five doubles. Granted, Daza has had only 92 plate appearances, but he looks solid at the plate.

* The best quote of the season still belongs to lefty Kyle Freeland. During spring training, before he injured his shoulder, Freeland said: “Being an underdog means being someone that the general public doesn’t think is going to perform at all so I think, as a whole team, we’re using that as a chip on our shoulder to push us to shock the world and prove the doubters wrong.”

While I don’t think the Rockies are going to shock anyone in baseball, let alone the world, you’ve got to admire Freeland’s moxie. His “me-against-the-world” mentality is one of the reasons why he’s been successful and one of the reasons he’s on track to return from his injury much faster than I anticipated.