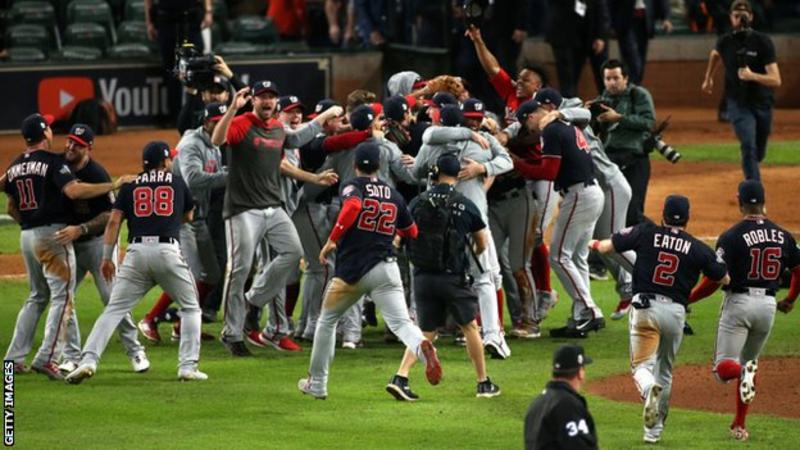 The Washington Nationals are World Series champions for the first time after beating the Houston Astros 6-2 in the decisive seventh game in Texas.

It is the first time in history that the visiting team has won all seven games of the ‘Fall Classic’.

The Astros led 2-0 after six innings before Washington’s Anthony Rendon and Howie Kendrick homered in the seventh to turn the game on its head.

Nationals pitcher Stephen Strasburg was the series’ most valuable player.

Strasburg had been the winning pitcher in both his starts, in games two and six.

Nationals ‘stay in the fight’

The quirk of the road teams winning all games of a seven-match series had never been matched in 1,420 major US sports series across Major League Baseball, basketball’s NBA and ice hockey’s NHL.

But it caps a remarkable season for the Nationals, whose manager Dave Martinez had been under pressure after they lost 31 of their first 50 games.

Their 2019 team slogan was “Stay In The Fight” – and in the postseason against the Milwaukee Brewers, the Los Angeles Dodgers, the St Louis Cardinals and now the Astros, Washington had trailed on five occasions in elimination games and came back to win each time.

It is the first title for the US capital since 1924, when the Washington Senators franchise (now the Minnesota Twins) won the World Series. 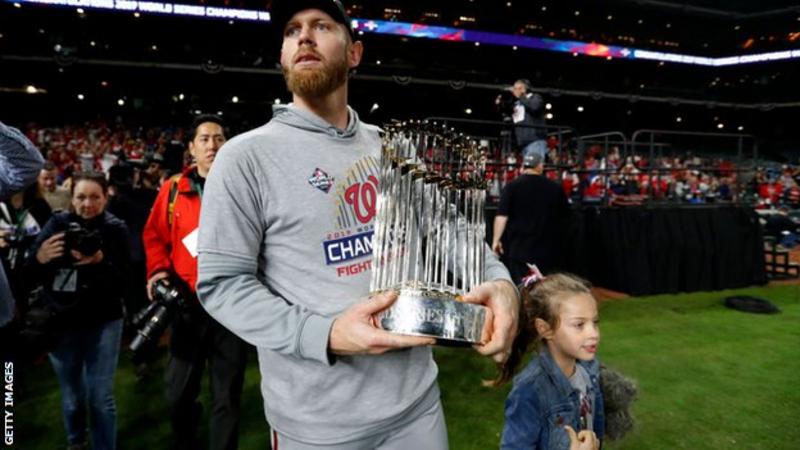 Nationals starting pitcher Max Scherzer had missed his scheduled start on Sunday after waking up with back and neck spasms that prevented him dressing himself without the assistance of his wife.

A cortisone injection and some intensive chiropractic therapy allowed the 35-year-old to start game seven, and he was able to throw five innings before turning it over to the bullpen, where Patrick Corbin tossed three scoreless innings to be awarded the win, and Daniel Hudson struck out Michael Brantley for the decisive final out.

The result was harsh on Scherzer’s opposite number Zack Greinke who had blanked the Nats for six innings before giving up a home run to Houston-born Rendon in the top of the seventh.

Greinke left to a standing ovation with the Astros 2-1 up, but Kendrick smashed a two-run homer against the right field foul pole to make it 3-2, with Juan Soto and Adam Eaton driving in further runs in the eighth and ninth to give the visitors breathing space.

No home comforts for Astros

Houston, the 2017 champions, had not lost four successive home games in a year in which they enjoyed the best record in MLB, winning 107 of their 162 regular-season games including 60 out of 81 at home – and needed to make home field advantage count.

But after Yuli Gurriel’s second-inning homer got the hosts on the scoreboard, they struggled to hit successfully against Scherzer with runners in scoring positions, an area where they had struggled all series.

Houston stranded two baserunners in each of the second, third, fourth and fifth innings, although Carlos Correa’s single drove in Gurriel to make it 2-0 in the fifth.

But they were unable to support Greinke’s heroics with any more runs, and had no response when Washington feasted on the Astros relievers.