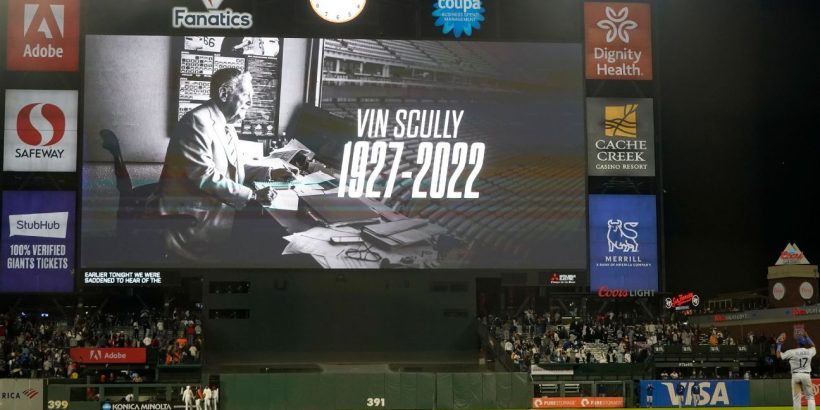 The sports world has lost one of its most iconic voices. Hall of Fame broadcaster Vin Scully died, at age 94, Tuesday, according to the Los Angeles Dodgers.

He called games for the Dodgers for 67 years, traversing their move from Brooklyn to Los Angeles. His voice is also the soundtrack to some of legendary moments, including Hank Aaron’s 715th home run, Bill Buckner’s muffed play at first in the 1986 World Series and Kirk Gibson’s limping home run in the 1988 World Series. He also called “The Catch” — San Francisco 49ers QB Joe Montana’s touchdown pass to Dwight Clark in the 1981 NFC championship game.

Scully’s career with the Dodgers spanned historic names from Jackie Robinson to Sandy Koufax to Orel Hershiser and Fernando Valenzuela to Clayton Kershaw and the current team.

“Just when you think about the Dodgers, there’s a lot of history here and a lot of people that have come through,” Kershaw said after Tuesday’s game. “It’s just a storied franchise all the way around. But it almost starts with Vin, honestly.

“Just such a special man.”

People and teams from around the sports world paid tribute to Scully.

Many people around the sports world honored Scully by reliving some of his famous calls.

Scully was also a beloved figure in Los Angeles among sports fans, teams and celebrities.

“He had a voice & a way of storytelling that made you think he was only talking to you,” former Los Angeles Lakers great Magic Johnson, a part owner of the Dodgers, tweeted. “Vin was the nicest & sweetest man outside of the booth & was beloved by all of our Dodgers family.”

In 2016, Scully was awarded the Presidential Medal of Freedom, the highest civilian honor given by the President of the United States. This is what President Barack Obama said: