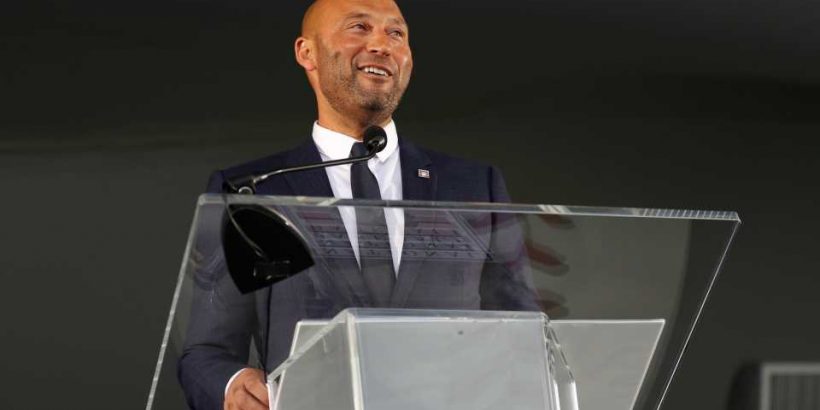 Derek Jeter was reminded standing at the podium in Cooperstown how great it felt to hear the applause from a crowd and chants of “Derek Jeter” in the air.

On Wednesday, he got to experience the feeling once again as “The Captain” was officially inducted into the Baseball Hall of Fame. He was enshrined with Larry Walker, Ted Simmons and Marvin Miller as part of the class of 2020 that had its ceremony delayed a year because of the COVID pandemic. No one was voted into the Hall of Fame during balloting in 2020.

Jeter said for the past 20 months, everyone has asked him how his Hall of Fame speech was going. He said he didn’t start until two months ago, and when he did he had no idea how to start the speech.

“Where do you begin? Who do you thank, and quite frankly, considering the circumstances, who am I going to be saying it to and in front of? What can I say in 15 minutes that can cover my entire career. You want to say something meaningful, impactful and memorable,” Jeter said. “Finally, I just said, ‘Stop overthinking and just write down how you feel.’ So let me start by saying congratulations to Larry, Ted and the late Marvin Miller. I mean, I’m so honored to be inducted with you guys and linked to you forever in the Major League Baseball Hall of Fame class of 2020.”

Though Jeter has at times been a polarizing figure in the sport, there is no question that his resume is worthy of enshrinement in the Hall of Fame. He is the 26th member of the 3,000-hit club to be inducted into the Hall of Fame after he finished his career with 3,465 hits. Jeter wrapped up his career with a slash line of .310/.377/.440, launched 260 home runs, stole 358 bases and posted 73.0 WAR, according to Fangraphs. He won five World Series, was named an All-Star 14 times, earned a Gold Glove five times and received a Silver Slugger five times.

When he was voted into the Hall of Fame by the Baseball Writers’ Association of America, he received 99.75 percent of the vote on his first ballot, a fact he made sure to remind the crowd.

“Thank you to the baseball writers — all but one of you — who voted for me,” Jeter said, “and everyone who covered me during my career.”

Jeter spoke about conversations he remembered having with Rachel Robinson, the widow of Jackie Robinson, and Hank Aaron, and how much it impacted his career. He mentioned also that while he had been told that the induction would still feel just as good now as it would have had it been on its originally scheduled date in 2020, he felt the loss of Hall of Fame legends who died during that time.

“The Hall of Fame is special because of those who are in it and we’ve lost way too many Hall of Famers over the last 20 months and these are all Hall of Famers who would have or could have been here,” Jeter said. “And selfishly for that reason, it’s not the same. Because when everyone asks about nerves, they assume because of the speech, what I may say or not say, the number of people in attendance or watching at home. No, no, no. The nerves are because these guys behind me right now and all those that are a part of the Hall of Fame family. Because you know the great thing about baseball is its history and that’s what makes it so special.”

Jeter talked about his parents, his desire to grow up as a Yankees player and the impact his wife, Hannah, and daughters, Story Grey and Bella Raine, have had on him.

He wrapped up his speech by addressing the current MLB players and young kids hoping to play the game. He said the game requires “sacrifice, dedication, discipline and focus,” and that through the game, players will learn teamwork and humility.

“The one common thread with all of us here on stage is that we understand that there’s no one individual bigger than the game,” Jeter said. “The game goes on. It goes on because of the great fans we have. So take care of it, protect it, respect it, don’t take the time you have to play for granted. And remember the most important thing like I said earlier, it’s more than just a game. The greatest to ever play in the Hall of Fame family, they’re all watching. And I personally can’t wait to welcome a few of you on this very stage, just as I have been by so many others. So thank you all once again, it’s been a hell of a ride.”