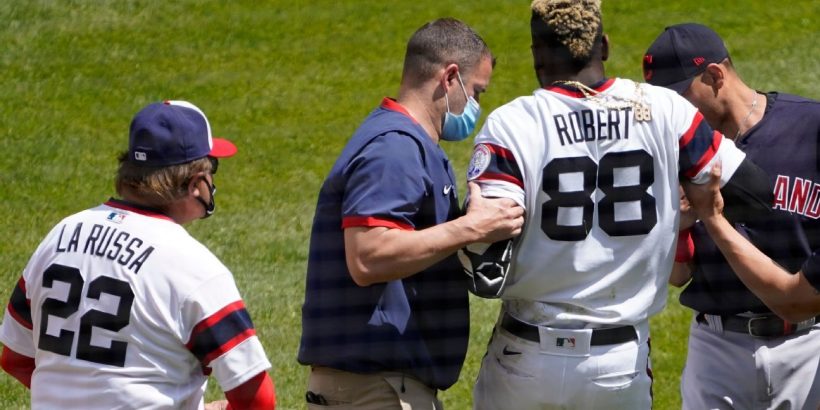 Robert, 23, injured himself on the bases in the first inning of Sunday’s loss to the Cleveland Indians. He limped off the field with the help of the training staff and will be examined further to determine a course of recovery.

“Those options include surgical repair if in fact the tear has affected the tendon’s attachment to the bone,” Hahn said. “Or a rehabilitation process in which natural healing will take place if the tear is to the muscle, as opposed to the attachment.

“The timeline is the same, whether there is surgical intervention or rest and rehabilitation.”

Robert is a five-tool player who was hitting .316 with eight RBIs and four stolen bases before getting hurt.

The injury is another blow to the White Sox’s chances in the American League. They lost their left fielder, Eloy Jimenez, for the season to a ruptured pectoral tendon late in spring training and have been without the services of outfielder Adam Engel due to a hamstring strain. His recovery has been slow.

“The setback put us back to square one in terms of his return,” Hahn said of Engel. “He is trending in the right direction but we are currently three weeks away from Adam beginning a rehabilitation assignment.”

Hahn said to expect Leury Garcia or Billy Hamilton to play center field on Tuesday when the team begins a series in Cincinnati, but the team could look outside the organization for replacements. Jimenez’s injury opened the door for playing time for Yermin Mercedes, who just won Rookie of the Month in the American League, but the White Sox might be running out of depth after their latest injury.

“It’s difficult and not how any team draws things up,” Hahn said. He also announced minor league pitcher Reynaldo Lopez had surgery on both of his corneas on Sunday after experiencing blurry vision. He’s expected to make a full recovery in a couple of weeks.

The White Sox did have one piece of good news. The team has surpassed the 85% vaccination threshold of its Tier 1 employees, which triggers a loosening of COVID-19 restrictions. That will occur on May 15 when the last of the vaccinated Tier 1 employees are two weeks out from their final shot.