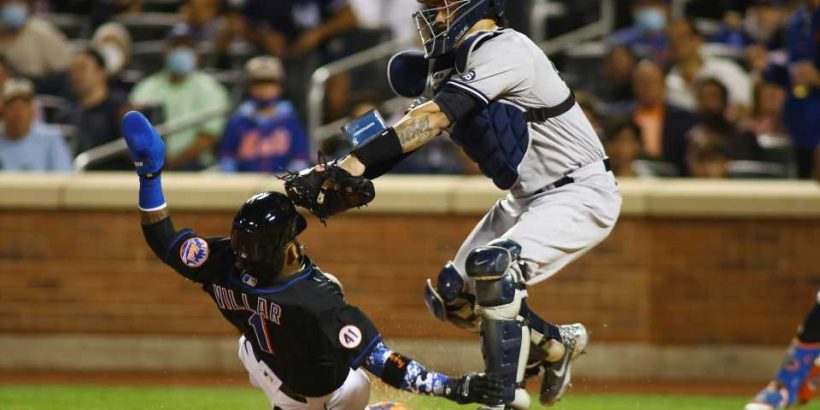 Yankees catcher Gary Sanchez gave his critics something else to use against him.

He botched an easy tag at home plate Friday night against the Mets, which cost his team an out and the lead. Sanchez inexplicably opened a sliding lane for Mets third baseman Jonathan Villar, who appeared ready to give himself up as he tried to score on a single from Mets second baseman Javier Baez to left field. The Yankees’ Joey Gallo’s throw from the outfield beat Villar by about 25 feet.

Not so long ago, catchers would have relished the chance to inflict physical harm on a baserunner who was out by that much, and a lot of runners would have been hardwired to run through the catcher to try to dislodge the ball. Recent MLB rule changes took such collisions out of the game, however, and the result Friday was Sanchez not staying in front of Villar.

The simple play for Sanchez would have been to take a step or two toward Villar and tag him in the chest with both hands. Even if Villar was trying to deke Sanchez, as YES analyst David Cone believed, he wasn’t in any position to get physical. As SNY analyst Keith Hernandez noted, Sanchez was “in armor,” meaning the chest protector and shin guards.

As it was, Sanchez almost got away with his lapse because home plate umpire Ted Barrett initially called Villar out. Barrett motioned that Sanchez tagged Villar on the helmet. The Mets challenged the call, and replays showed Villar got his right foot on the plate before the tag was applied.

The play helped to reinforce the opinions of fans and evaluators who believe Sanchez is a poor defense. Twitter predictably was unkind after the play.