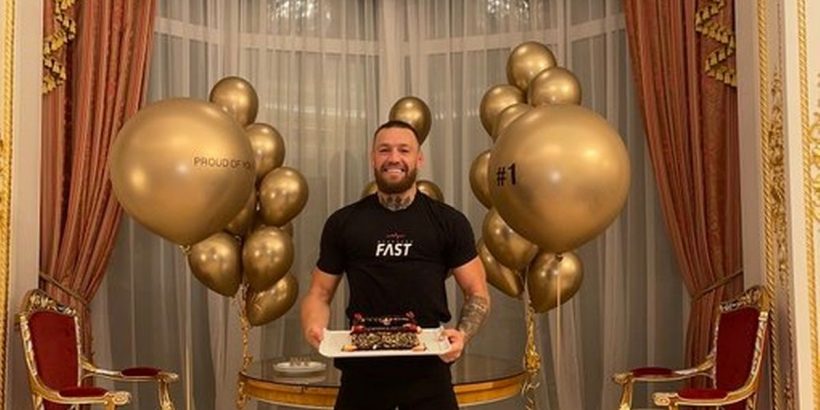 Conor McGregor celebrated with his family at their lavish Dubai holiday home after being named the richest athlete in the world.

UFC legend McGregor beat out the likes of Lionel Messi and Cristiano Ronaldo to earn his spot at number one on the list, which is put together by Forbes Magazine – less than five years after telling Ronaldo that he would overtake him.

The Irishman only fought once in the time period that was measured, losing to Dustin Poirier at UFC 257 in January, but he broke records with his off the field earnings, which brought his yearly income to a whopping $180 million (£128m).

Posting to his 48m social media followers on Twitter and Instagram to celebrate the achievement, McGregor said: "Uimhir a Haon [Irish for number one], baby we did it!

"Thank you Forbes for recognising my role as an entrepreneur, it was a dream to lead this list with so many successful athletes!

"Onwards and upwards we go." The former two-weight UFC champion joined an exclusive club with tennis legend Roger Federer and golf icon Tiger Woods after being named at the top of the prestigious list.

The UFC star only fought one time in the last year – but he managed to make history with his earnings outside the octagon, which eclipsed £112m ($150m).

Federer and Wodds are the only two other athletes have ever gone over $70m for their income outside of their given sport.

The majority of McGregor's income came from his gigantic £106m sale of whiskey brand Proper 12 to Proximo Spirits, and he also picked up £15.5m from his sporting endeavours.

He is expected to make another large eight-figure payday for his highly anticipated trilogy fight with Dustin Poirier at UFC 264 in July, which will feature a capacity crowd of 20,000 fans.

Football superstars Messi and Ronaldo came second and third behind McGregor while NFL quarterback Dak Prescott of the Dallas Cowboys in fourth completed the lineup of athletes who made over $100m (£71m).

In the octagon, McGregor will have a keen eye on this weekend's UFC 262 pay-per-view, where the lightweight title he once held is being competed for by Michael Chandler and Charles Oliveira.

Should he beat Poirier, who is the number one contender in the division, McGregor is likely to earn a title shot against the winner of Saturday's fight.