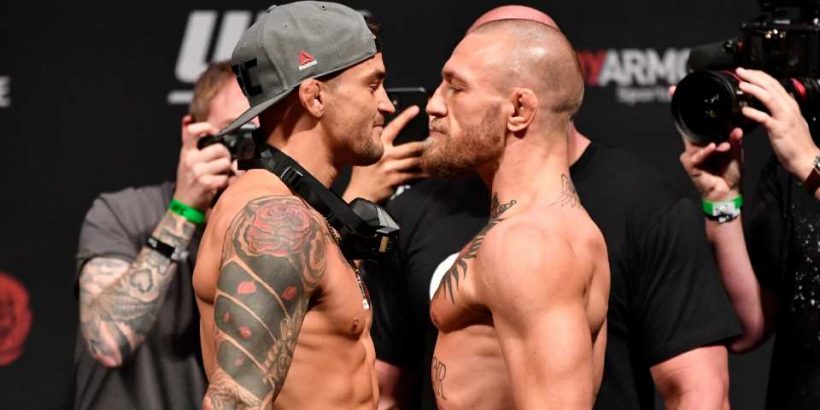 With their series tied at one fight apiece, Dustin Poirier and Conor McGregor will break the tie in the main event of UFC 264 on July 10 at T-Mobile Arena in Las Vegas.

The rivalry started in 2014 when McGregor knocked Poirier in the first round when both were featherweights. Their careers went in different directions after that fight as McGregor would go on to become the first fighter in the UFC to hold world titles in two different divisions simultaneously while Poirier took the long road to gold and won an interim lightweight title in 2019.

Both would fall short to Khabib Nurmagomedov and eventually met for a rematch that saw Poirier get his revenge with a second-round knockout at UFC 257 in January.

What had seemingly become a rivalry between respectful athletes has gone sour since their last fight as Poirier accused McGregor of not donating the $500,000 he promised to Poirier’s charity “The Good Fight” following their January rematch. The two had a war of words on Twitter and the trilogy fight was booked shortly after when Poirier opted to face McGregor rather than challenge for the UFC lightweight title, which Charles Oliveira won by knockout over Michael Chandler.

The winner will earn bragging rights and likely be next in line for a title shot while the loser will have to pick up the pieces to their damaged career.

Below is a full rundown of the schedule for UFC 264, with details on the fight matchups, start times, odds and more for the Conor McGregor vs. Dustin Poirier trilogy.

When is Conor McGregor’s next fight in 2021?

UFC 264: Dustin Poirier vs. Conor McGregor 3 takes place on July 10 with the early prelims kicking the event off at 6:15 p.m. ET, before the pay-per-view main card begins at 10 p.m. ET. Poirier and McGregor should enter the Octagon around 12:15 a.m. ET, depending on the length of the undercard bouts.

How to watch UFC 264: McGregor vs. Poirier

The main card for UFC 263 is available in the U.S. on the ESPN+ subscription streaming service for a pay-per-view cost. That portion of the event begins at 10 p.m.

Earlier fights, however, are viewable live on ESPN, the WatchESPN app and, for the early prelims, on UFC Fight Pass.

McGregor vs. Poirier price: How much does UFC 264 cost?

UFC 263 will take place at the Gila River Arena in Glendale, Ariz., in front of a live crowd.

McGregor vs. Poirier odds for UFC 264

According to FanDuel Sportsbook, McGregor and Poirier is nearly an even money fight with Poirier at -105 and McGregor sitting at -114. With those odds, one would need to bet $105 on Poirier to gain a $100 profit while a $114 bet is necessary to earn a $100 return if McGregor emerges victorious.