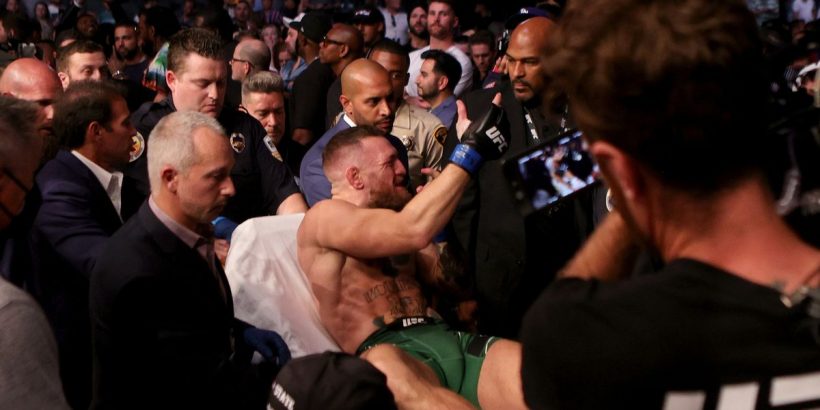 Former UFC lightweight Paul Felder has slammed Conor McGregor for his scathing assault on Dustin Poirier after their trilogy bout at UFC 264.

McGregor was brutal in his post-fight assessment after retiring due to a horrific leg injury, describing the 'war as not over' and trolling Dustin Poirier and his wife to interviewer Joe Rogan.

His actions have not entirely well received by the world of UFC after the fight, with company president Dana White speaking out against them, and now Felder has called for McGregor to show more 'humility' in defeat.

“You’re on the ground with your leg broken in half at the bottom, threatening to kill somebody, to a man who has just dominated you twice in a row now," Felder told the UFC post-fight show.

"He could walk up and soccer kick you in the mouth, knock all your teeth out and leave you for dead on that canvas.

“Show some humility. Listen, this sport is violent. I get that. We’re supposed to beat the crap out of each other, knock each other out.

“But at the end of the day, it’s not about murder. It’s not about your family. Leave those things out of your mouth, or get the hell out of the octagon, I never want to see you again.”

McGregor and Felder have clashed previously during their time in the UFC with the Irishman mocking Felder's nickname as 'The Irish Dragon', but he offered his best wishes to the American when he retired from fighting last month.

The verbal attack that was put into focus by Felder after the fight, appeared to reignite the potential of a fourth fight against Poirier despite losing the last two bouts against the American.

"This is not over! If I have to take this outside with him it's on outside I don't give a b*******," he said in a post-fight interview with Joe Rogan.

However this fight could already be on the rocks, with Dustin Poirier's coach Mike Brown deeming a fourth episode of the duel 'unnecessary'.

"Your wife is in my DMs, hey baby, hit me back up I'll chat to you later on, I'll be at the after party; The Wynn night club."

The Irishman has since been trolled for his ankle injury in the cage by boxer Floyd Mayweather who posted edited pictures mocking the broken bone, in addition to Khabib Nurmagomedov who suggested a 'higher power' caused the fight to be stopped.

But not all of the reaction has been negative since the fight, with UFC lightweight champion Charles Oliveira insisting that McGregor deserved 'a standing ovation' after the events of UFC 264.

With a period of medical suspension set to rule the 33-year-old out of action for almost a year, a shortlist of potential future opponents has emerged including a trilogy contest with Nate Diaz and a super-fight with Jake Paul in a return to boxing also on the cards.