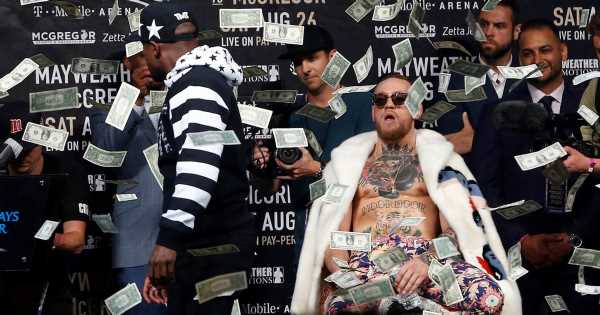 Conor McGregor will see his bulging bank account swell once again after his third fight with Dustin Poirier.

The Irishman has already amassed a big enough fortune to keep his children and grand children in the finest of suits – but he is showing no sign of slowing down.

The former two-weight world champion is expected to earn around $20million regardless of the result against Poirier in Las Vegas tonight.

McGregor has certainly come a long way since he earned a guaranteed $6,000 for his UFC debut against Marcus Brimage.

And such is his pulling power that he was named the richest athlete in the world this year thanks to his earnings outside the cage.

The 32-year-old was pressed on whether he was serious before admitting buying into Scottish Premiership side Celtic was also an option whilst confessing his affection for the Red Devils.

He said: "A conversation came up regarding Celtic first to be honest. To acquire shares from Dermot Desmond.

"I am certainly interested in acquiring a sports team at some stage! Both Celtic and Man United are teams I like for sure.

"But I am open. I feel I could do big things for a club."

McGregor may be a very wealthy man – but he's not rich enough to buy the Old Trafford club.

Manchester United was valued at £3.05billion by Forbes on April 13, making them the fourth most valuable club on the planet.

It was the first time the Red Devils had fallen out of the top three places since ratings began in 2007, with Spanish giants Barcelona and Real Madrid, as well as German titans Bayern Munich, all ranked above them.

Nevertheless, United remain the most expensive club in England and even with McGregor's recent sale of his Proper 12 whiskey brand, he could not come close to buying a sizeable stake.

The Dubliner announced recently that he had agreed to sell his share in the company in a deal worth up to $700m.

He will retain an active interest but has secured his family's future in the process – although he did a pretty good job of that before he dabbled in the spirit industry.

McGregor has been fighting in the UFC since 2013 and has participated in eight pay-per-view fights in that time.

In 2017, he stepped into the boxing ring with Floyd Mayweather and banked a cool £61million after tax upon signing the contract.

If he was to step away from fighting right now his net worth would stand at $200m – without his whiskey fortune.

Not bad for a working class kid who started out his adult life as an apprentice plumber.