‘There are a million ways it can play out but him jumping a guillotine never crossed my mind’: Dustin Poirier reflects on his trilogy win over Conor McGregor, ‘proving he is the better fighter’ and what surprised him most in their UFC 264 showdown

Now that the dust has settled on that manic, shocking and frustrating night in Las Vegas, Dustin Poirier reflects on a job well done.

His victory over Conor McGregor in the headline act of UFC 264 was utterly unpredictable both in the five minutes inside the cage and gruesome conclusion.

McGregor suffered perhaps the worst round of his career with two judges scoring it a 10-8 before the Irishman compounded his misery by snapping his tibia in the closing seconds. 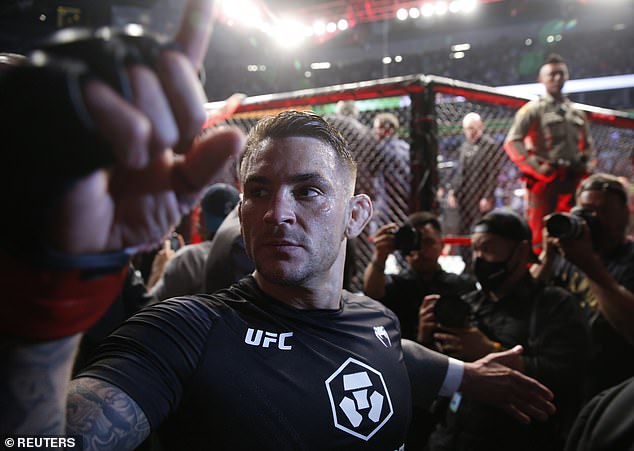 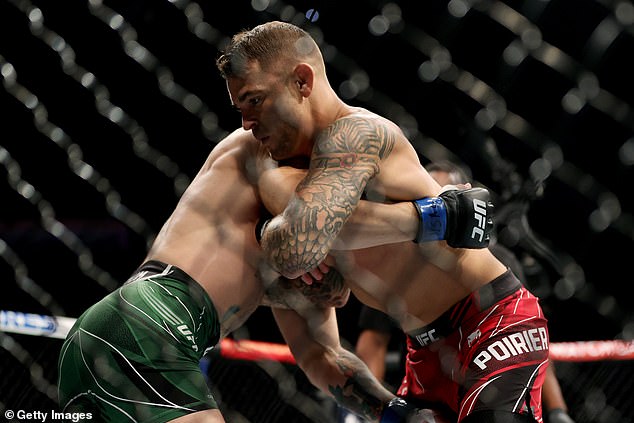 Poirier says he had McGregor hurt, which is why the Irishman initiated a clinch

Poirier was denied the finish his work in the opening stanza appeared to be building towards and despite his domination, aspects of the fight came as a surprise.

Before the event, McGregor said: ‘First one to shoot for a takedown is a dusty b****’, to which Poirier replied: ‘How about the first one to be taken down is a dusty ‘b****, this is MMA. Put it all together. It reeks of insecurity to me.’

So when Poirier landed a fluid combination and had his opponent scrambling for the clinch and attempting a submission, it came out of left field.

The Louisiana native exclusively told Sportsmail: ‘I wouldn’t say it surprised me how much I dominated the first round, what surprised me was him attempting to submit me and give up position. 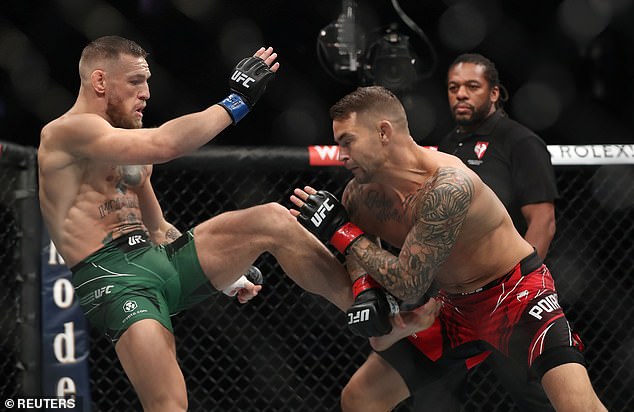 ‘The fight plays out in your head for weeks leading up to it, there are a million ways it can play out but him jumping a guillotine is never one that crossed my mind, that was a bit surprising. But my performance, abilities and what I think I’m capable of, that doesn’t surprise me.

‘I thought he was hurt and trying to protect himself (by going into the clinch), that’s what that was, it just sucks for him saying all that stuff and then he initiates that clinch.’

The pre-fight words came back to haunt McGregor, including his prediction that Poirier would be carried out of the arena on a stretcher when it turned out to be the Dubliner who was.

The furious indignation from McGregor on the mic, admittedly while nursing a horrific injury and huge disappointment, strayed into the personal afterwards when he tried to goad Poirier by talking about his wife.

The American dealt with it admirably and will not be drawn on the ugly tirade. He added: ‘It is what it is man, I don’t want to keep kicking a guy when he’s down, keep talking about the negativity, there’s a lot of positive stuff out there. 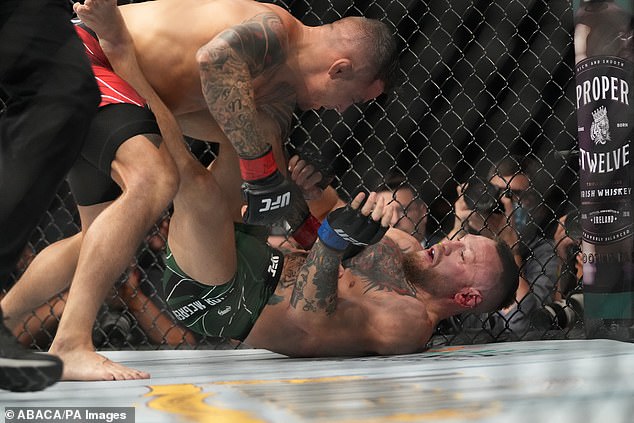 ‘We just auctioned off the gear I wore to the octagon to help build housing and a pharmacy in Uganda so you know there are a lot of positives to talk about, I don’t want to keep bashing a man.’

Eyebrows have been raised at the manner in which the McGregor camp handled the outcome, with highly-respected coach John Kavanagh widely criticised for his assessment of the first round.

McGregor’s long-time coach told Laura Sanko: ‘I wasn’t concerned at all (with how it was going), I was actually really, really happy.

‘A few adjustments between rounds and I thought we were on track to getting a finish there or at least keep going, keep the rhythm going for the rest of the fight.’ 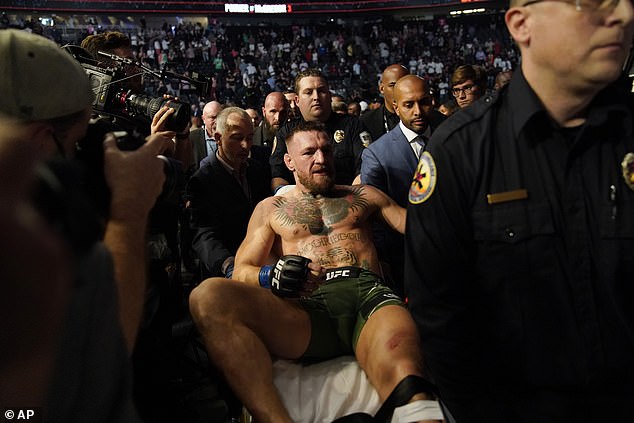 Poirer’s coach Mike Brown pointed out the judges’ scorecards showed that assessment to be wide of the mark and he himself admitted it is not what he would have told a fighter he was cornering.

He added: ‘Me personally, I do corner up-and-coming young fighters, even established fighters I can help out. If I was working with somebody in their corner and a round went like that, I definitely wouldn’t say that was the way I wanted it to go.

‘But anything is possible in fighting and maybe he could have landed a shot that ended the fight – too bad we didn’t get to see what would happen.’

Much was made of Poirier’s decision to turn down the opportunity to fight for a vacant belt in favour of the more lucrative contest against McGregor.

‘This isn’t over,’ McGregor roared into the mic after the doctor’s stoppage but how does his opponent feel? 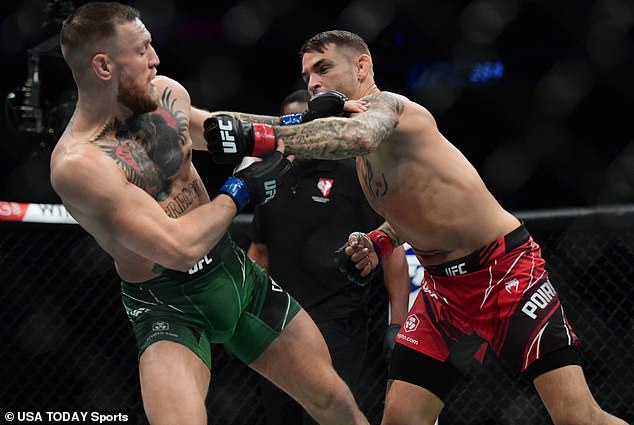 A fourth fight somewhere down the line would still generate huge interest and another whopping payday but competitively ‘Diamond’ feels he’s shown himself to be the superior fighter.

He continued: ‘I think I have proven myself the better fighter twice in a row here but we’ll see what happens in the future (about a fourth fight).

‘I don’t know when he’s coming back, he has a long recovery, a long road ahead of him. I’m next in line for a title shot, it’s hard to call what’s going to happen in the future, I don’t know.’

McGregor will be sidelined for around a year, according to UFC president Dana White and Poirier, still the No 1 contender, will march on to a title shot.