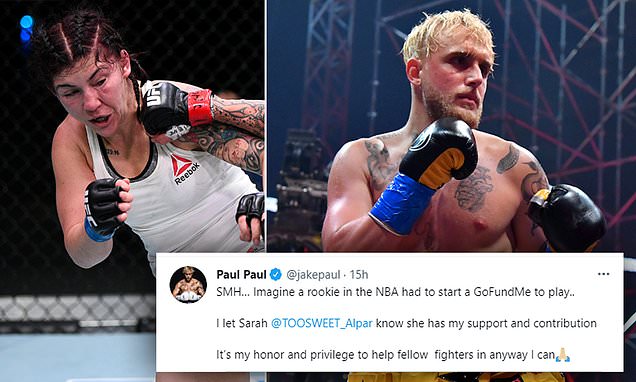 YouTuber-turned-boxer Jake Paul donates $5,000 to help struggling fighter Sarah Alpar cover training costs… as he takes swipe at Dana White and UFC by insisting: ‘Imagine if a rookie in the NBA had to start a GoFundMe’

Jake Paul has donated $5,000 to Sarah Alpar’s GoFundMe page ahead of her next UFC fight.

Alpar, who will fight for the second time in the top MMA promotion in September, was forced to set up a donations page to cover the cost of her training.

The bantamweight contender is trying to balance full-time training with studying and says her 65 hours per week schedule it taking a toll on her financially. 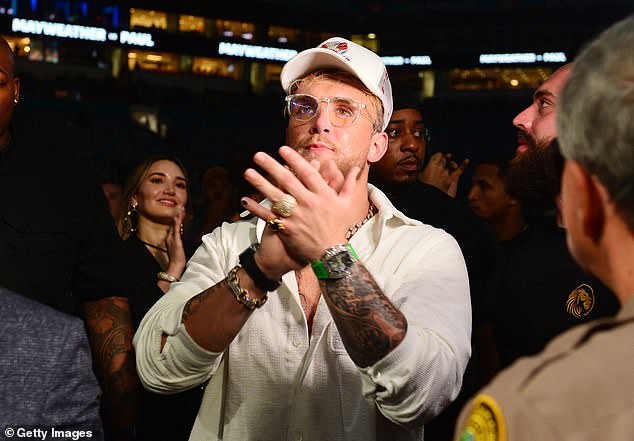 Jake Paul has donated $5,000 to Sarah Alpar’s GoFundMe page ahead of her next UFC fight

Drawing attention to Alpar’s campaign, Paul told his 4million followers that he would be happy to help.

The YouTube star, who is still lobbying to get fighters paid, Tweeted saying: ‘Imagine a rookie in the NBA had to start a GoFundMe to play.

‘I let Sarah Alpar know she has my support and contribution, It’s my honor and privilege to help fellow fighters in anyway I can.’

Alpar made her UFC debut after a successful performance on the Contender Series, but then struggled to overcome Jessica-Rose Clark at bantamweight – losing in the third round by TKO. 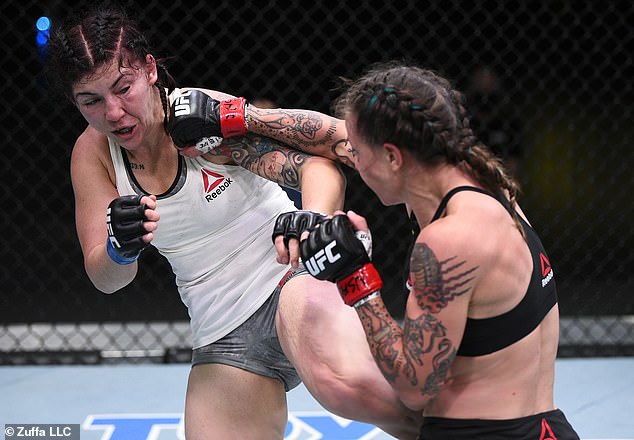 Alpar has not stepped into the octagon since her debut as the pandemic saw her next two scheduled fights fall through.

As a result, she has been forced to rely on her barista job at Starbucks and the occasional jiu-jitsu lesson to make ends meet.

Speaking about the realities of becoming a professional UFC athlete, Alpar told MMA Fighting: ‘What I thought it would be that, “Oh, everything’s taken care of and I can just train full time and then my life is complete” but it’s not that way.

‘Just being a fighter in general, you don’t get paid anything leading up, like the other organizations … we’re making pennies, and that’s compared to what UFC gives us.’

As a result, the fighter took to social media to make a public plea to her fans for help. She said the donations to her GoFundMe page would pay for food, supplements, training, living expenses, gym fees, medical fees, and more.

Her Instagram post read: ‘What this does, is it helps me to travel, take care of gym fees, to be able to afford food, anything.

‘You guys, I’m ready, I’m working, I’m going to school, I’m training, I’m putting in at least over 65 hours a week in these things, and I want to make this happen.

‘I want to go so far in the UFC and I can’t do it without you and my “Too Sweet Tribe.”

‘If you want to donate even $5, $10, anything is so helpful in order for me to be able to focus on training and to be able to win my next fight.

‘I want to thank everybody again for the donations that have already been put in. ‘I would like to make a goal of $1000 by July 1. Let’s make this happen, you guys.

Alpar set a goal of $30,000 that she had hoped to reach by December 1, 2021. However, she had received few donations prior to Paul’s contribution.

Paul’s donation brought Alpar’s target up to $8,100 and given his mass following, the public went on to help her reach her target with over $34,201 raised so far.

Speaking about her need for donations, Alpar said: ‘I’m trying to get the fullest out of my training and to do the best I can and be the best I can be.

‘I’m not just doing it for myself. I’m trying to be a role model for others. I’m trying to put all my focus on training and go where I need to go to make that happen.’

Alpar is set to face Erin Blanchfield in her next fight, due to take place on September 18.

The fight will feature on the undercard of Anthony Smith’s showdown with Ryan Spann.