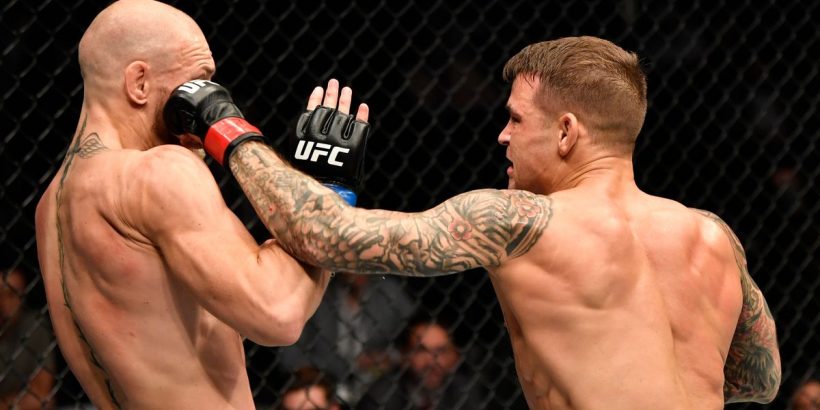 McGregor and Poirier will clash for a third time on July 10, six months after the Irishman was stopped by his lightweight rival.

And Nurmagomedov, who holds submission victories over both men, believes McGregor can only win in the first round.

"If it’s the first round [for a finish], I’d back Conor. From the second and further, then Dustin [wins]."

His old belt was won by Charles Oliveira who beat Michael Chandler in May.

And the Russian, who retired unbeaten with a record of 29-0, believes the 155lb division is among the hottest in the UFC.

When discussing his protege Islam Makhachev, Nurmagomedov added: "There are many fighters at the top of the rankings who haven't won anything for a long time now.

"If Islam wins in July he will have eight wins in a row and he will keep moving forward.

"[There is] such a nice composition to the division; not only [the Russians] but also the Brazilians. For instance, take a look at Oliveira or Rafael Dos Anjos.

"The Americans are also well-represented in the division; Poirier, [Justin] Gaethje and Chandler. So it is going to be fun; like the World War… the Russians, the Americans and the Brazilians.

"This division has always been interesting and difficult so it will be fun by the end of this year."

Despite admitting that he misses the competitive side of fighting, Nurmagomedov will not return to the cage unless his mum gives her son her blessing.

The Dagestan native hung up his gloves following the death of his father last year having promised his mum he would not fight on.

And Nurmagomedov's coach Javier Mendez does not envisage his charge returning to action.

“I guess you could say he wants to fight again – but absolutely not because his mother would have to give him permission before any of that. I mean, he misses training, he misses coaching,” he told Betway Insider.

"I took it as he misses being around me and coaching. Our relationship is more than fighting, that goes beyond fighting. It’s not a relationship like: ‘Okay I’m done with my career, you know, my coach and I were just distant friends.’ No. We’re family, we grew with each other. They’re family to me and we’ll be in each other’s lives for the rest of our lives.

"He loves the fighting, the energy, and he loves watching his cousins and his teammates perform. He gets nervous for them. You know, when we went to the last fight and his cousin Abubakar was to fight, he just got all energised and he said ‘I miss this feeling’.

"And it’s a feeling that he’s gonna miss for a while because of that adrenaline you get from entering that octagon with all those people cheering you on. It’s hard to replace that in normal life because normal life is not like that."