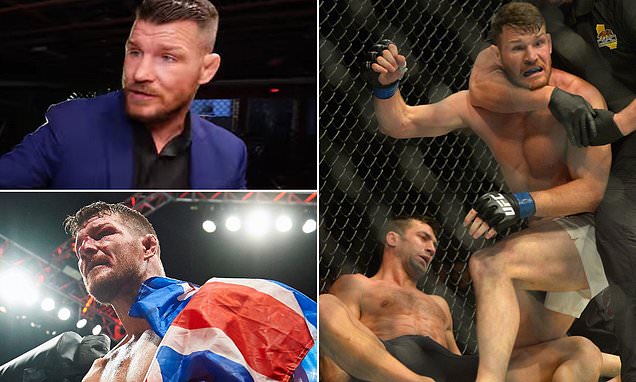 Given the sparkling array of British talent on display at UFC London this weekend, there’s no better time to bask in the glory of the first champion from these shores.

Michael Bisping remains the pioneer, the only Brit to have that belt wrapped around his waist by Dana White and his incredible story is of course intertwined with the O2 Arena.

It was at the O2, also hosting Saturday’s action, where Bisping came back from adversity to overcome the legendary Anderson Silva. 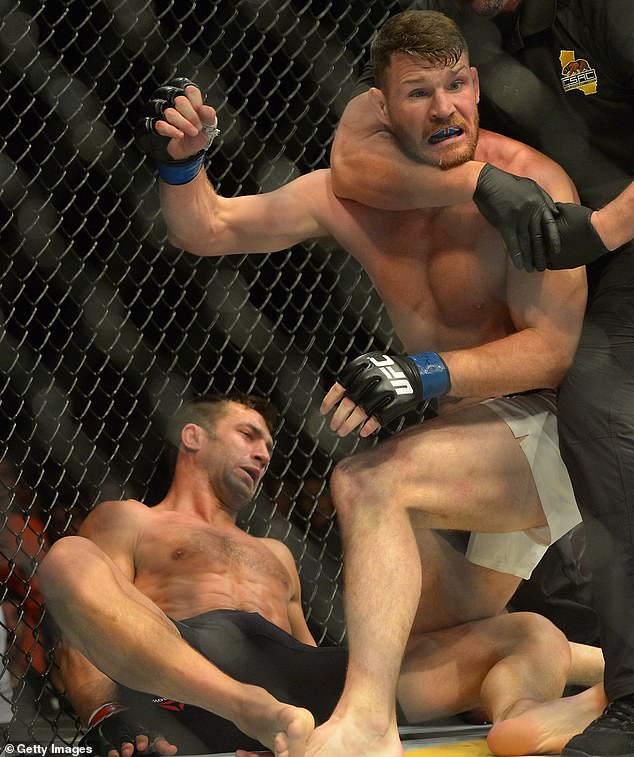 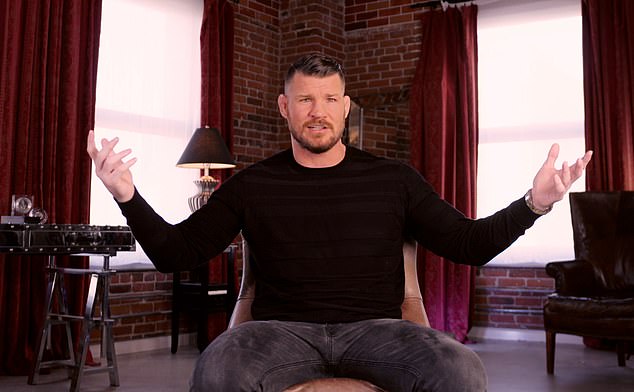 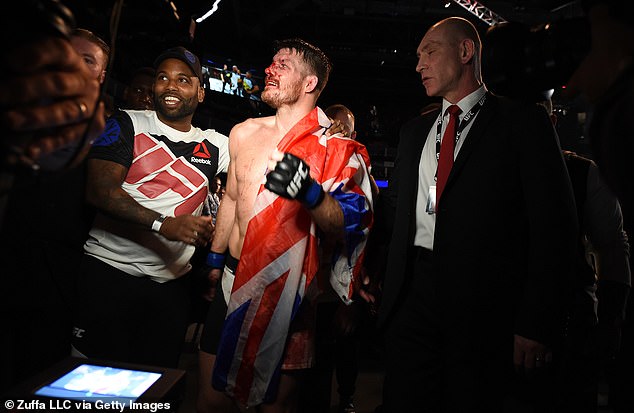 Bisping beat Anderson Silva at the O2 Arena, which is hosting UFC London again on Saturday 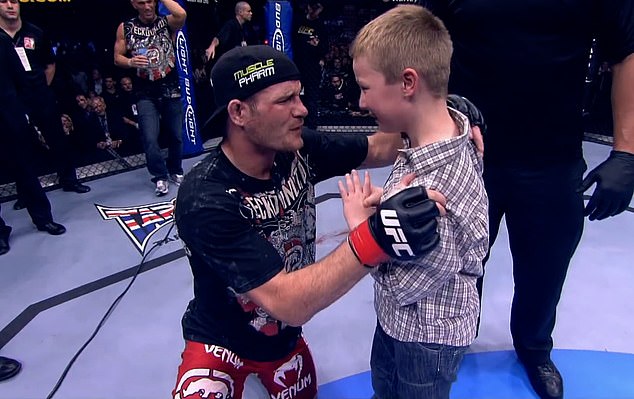 Silva landed a massive jumping knee after Bisping lost his mouthpiece and became distracted but he was rescued by the buzzer.

The Brit then showed his typical resolve to recharge and scrap his way to the decision win that ultimately led to his title shot on short notice.

Every detail of Bisping’s remarkable journey has been captured in a new documentary ‘The Michael Bisping Story’, released on March 21.

It charts the highs and lows of his rollercoaster career and the triumph over adversity.

‘Triumph over adversity’ is often trotted out but Bisping’s career embodied it after he lost an eye following a brutal head kick against Vitor Belfort, who was later found to have been fuelled by a banned substance.

In the film, UFC president White admits he thought that injury would spell the end of Bisping’s career, how could it not?

But the man from Clitheroe not only kept fighting, he kept winning too.

And when Chris Weidman dropped out of his scheduled fight with Luke Rockhold, Bisping was the next cab off the rank.

The Rockhold fight had extra meaning for him having lost to the American already but the rematch would be a completely different story.

Bisping sent him tumbling to the canvas in front of a stunned arena and then finished the job in emphatic style to be crowned champion in incredibly emotional scenes.

Rare footage in the film shows touching moments in the cage with his family, in particular his young son Callum moments after winning a fight earlier in his career. 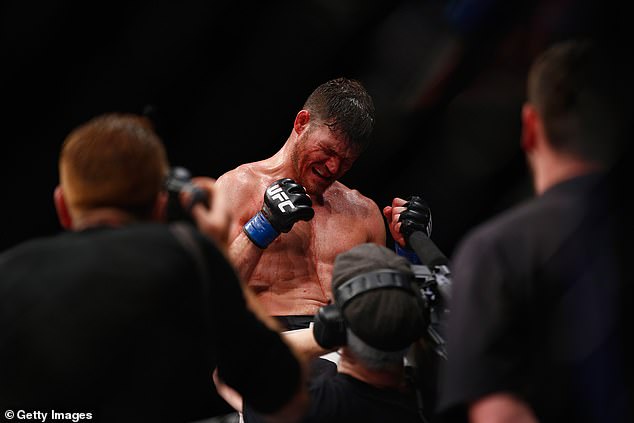 Bisping overcame unimaginable adversity and found success even without one eye 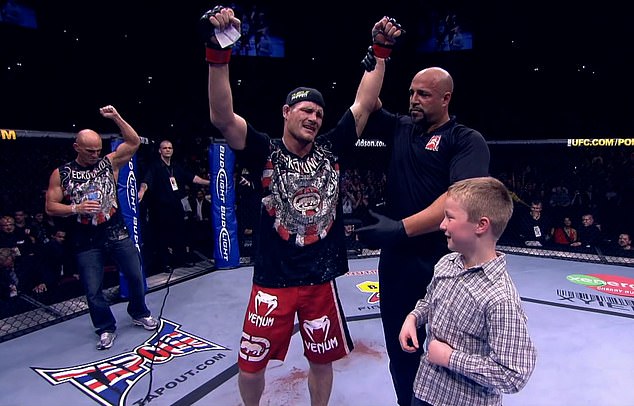 MMA throws up jaw-dropping stories all the time but Bisping’s takes some beating.

He will always be known as the first British UFC champion but he might not be the only one for much longer, given the rising stars from the UK.

Just as that night in the O2 Arena was a stepping stone for the ‘Count’ back in 2016, it could be a similar springboard this Saturday for the likes of Tom Aspinall and Arnold Allen in the main and co-main events.

Aspinall has a realistic chance of fighting for a title or interim title next with an emphatic victory, just as Bisping did six years ago. 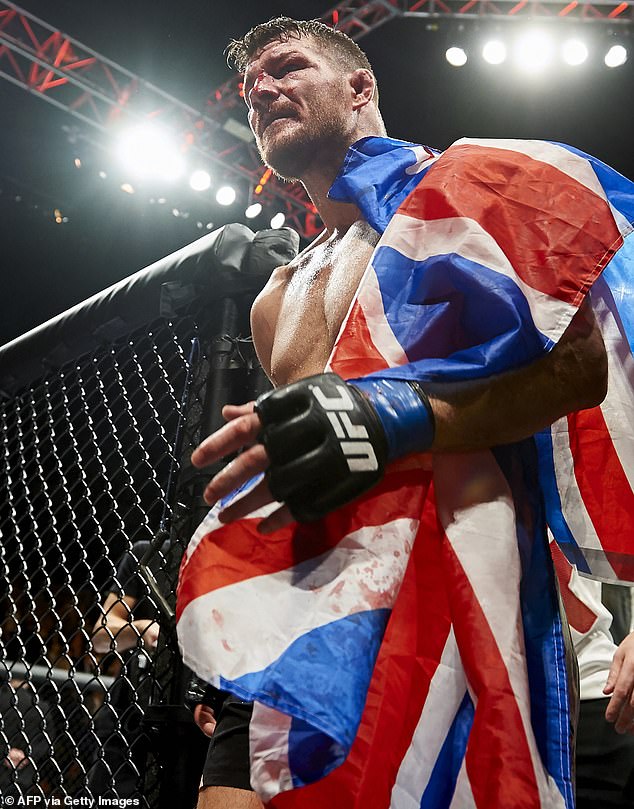 And Allen is unbeaten in the UFC’s featherweight division ahead of his huge meeting with Dan Hooker, who is dropping down from lightweight.

Jack Shore, who is 15-0, is a major force and is due to take on Timur Valiev. It would be no surprise at all to see the Welshman competing at the upper end of the bantamweight class by the end of 2022.

And of course this summer Leon Edwards is likely to have the next chance to follow in Bisping’s footsteps with his planned fight against Kamaru Usman.

No doubt Bisping will be among those cheering on his countrymen and women to equal his achievement as soon as possible.

But for now he remains alone and you can guarantee the O2 will erupt when he pops up on the big screen this Saturday night.

BISPING: THE MICHAEL BISPING STORY is available to rent or own on digital from March 21