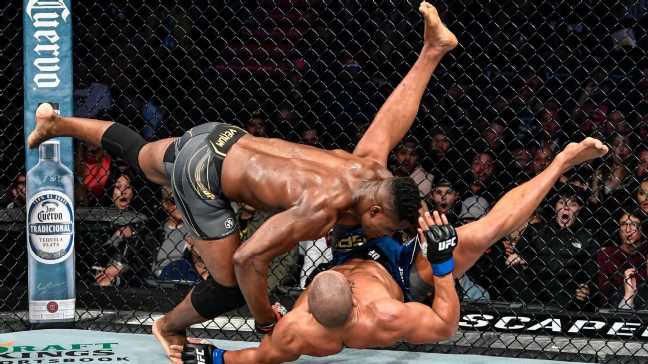 Ngannou entered as the UFC champion, while Gane was the interim champion.

Gane used an assortment of kicks and jabs and movement around the ring to frustrate Ngannou and avoid the champion’s massive power in the first two rounds.

But Ngannou changed up his strategy in Round 3 and turned to his wrestling skills, landing a big shot to the body and following with a hard slam. He scored another takedown in the closing seconds of the round.

Ngannou went back to his wrestling again in the next round, scoring his third takedown of the night and controlling Gane on the ground for the majority of the round.

Gane gained the edge in the final round when he got Ngannou to the mat and worked his way into a leg lock. However, Ngannou escaped the submission attempt and managed to take top position, where he remained for the final two minutes of the fight.

Ngannou (17-3), 35, won his title last March, when he knocked out Stipe Miocic at UFC 260. Born in Cameroon, he extended his winning streak to six fights.