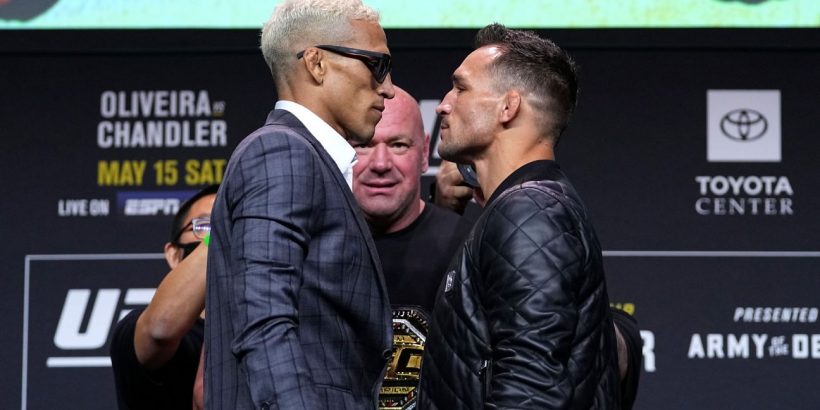 HOUSTON — The bout to crown the next UFC lightweight champion is official.

Charles Oliveira and Michael Chandler both made weight successfully Friday morning, coming in exactly at the 155-pound limit. The two men will compete for the vacant lightweight title Saturday night in the main event of UFC 262 at Toyota Center.

Former longtime champion Khabib Nurmagomedov retired earlier this year, relinquishing the title. Either Chandler or Oliveira will be the first UFC lightweight champ who isn’t Nurmagomedov since Conor McGregor was stripped of the title in 2018 due to inactivity.

ESPN has Oliveira ranked No. 3 in the world at lightweight and Chandler at No. 4.

Oliveira (30-8, 1 NC) has won eight straight fights and is one of the most talented submission artists ever in UFC. The Brazil native has the most submission wins in UFC history (14) and the most performance bonuses in promotion history (10). He is tied for the most finishes in UFC history with Donald Cerrone (16). Oliveira, 31, has been in UFC since 2010, and this is his first title shot.

Chandler (22-5) has won three fights in a row, including a first-round TKO win over Dan Hooker in his UFC debut at UFC 257 in January. The Missouri native is a former three-time Bellator lightweight champion. Chandler, 35, has the most finishes in Bellator history (13) and was long one of the faces of that promotion before signing with UFC in November.