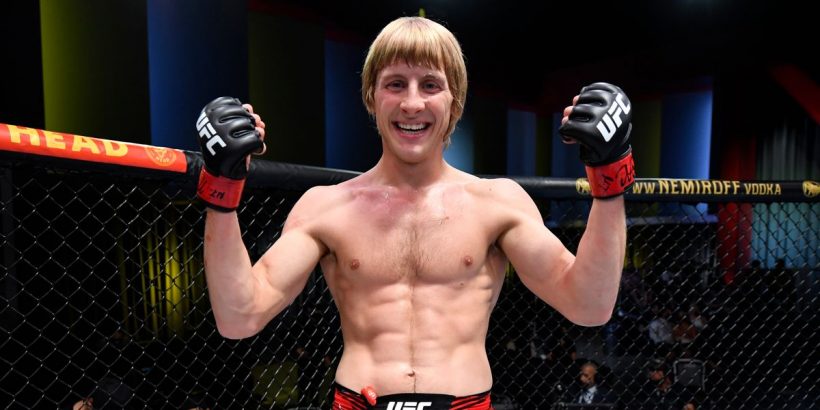 The UFC's newest British star Paddy Pimblett has told Chael Sonnen to pick up the phone and call him if he wants to hear the true story about his previous UFC call-ups.

Pimblett famously turned down MMA's top promotion on two occasions in his career, feeling that he wasn't at the right stage in his development to become the star he feels he has the potential to be.

But legendary former title challenger Sonnen has questioned Pimblett's story, wondering why an aspiring fighter appearing on smaller shows like Cage Warriors would not accept a call from the UFC.

And Pimblett has explained that he was being paid a special amount by the regional promotion due to his particular drawing power in his hometown of Liverpool.

"Chael's a proper fanboy isn't he?" Pimblett joked when asked about the comments by Mirror Fighting . "I've literally just been sent his latest video and watched it.

"It's seven minutes long and he's saying who I should fight and that.

Pimblett was first offered a contract after becoming featherweight champion, the same belt that Conor McGregor held three years prior, and again to fight on a Darren Till undercard in his hometown.

"Even they know because they did when I won the belt in 2016," he continued. "I was 21, I hadn't fought Julian Erosa and then they asked me again in 2018 when they were coming to Liverpool.

Did Paddy Pimblett impress you on his UFC debut? Let us know in the comments

"Molly [McCann] said yeah, but I said no and I'm glad looking back now that I did because it wouldn't have blown up like it has now.

"The wages Cage Warriors were paying me; I have my own house now, I was able to pay a mortgage off, I helped my sister sort her kitchen out.

"On the UFC wages I wouldn't have been able to do that."

Sonnen has made a number of videos about Pimblett, whom he refers to by his nickname of 'Paddy the Baddy', joking about his "bad haircut" and asking questions of his previous UFC contract offers.

In one, Sonnen blamed the media for not asking the requisite questions of his story.

"There is no part of me that believes an aspiring Mixed Martial Artist said no to the UFC not only once but twice and continued to fight on the regional scene.

"I don't believe it, but I don't have to believe it, it's a great story, it's the first time I've ever heard anybody say that, as though they were the ones saying no."

And Sonnen even branded Pimblett "a dope" for turning down the opportunity, assuming the story were true.

"That would make him a bit of a dope," Sonnen continued. "If Paddy were turning down the worldwide leader while continuing to pursue the sport that requires tremendous effort.

"You're training twice a day, spending the rest of your day recovering just so you can make it to the second session, and you say no so that you can continue to fight at the local club, you're a bit of a dope.

"I wouldn't say 'wow, that was really mature of you, wait until you're ready,' there's zero part where I would think that was a cool story.

"It might be true, I would love to have the whole backstory on it, you never get that in MMA."