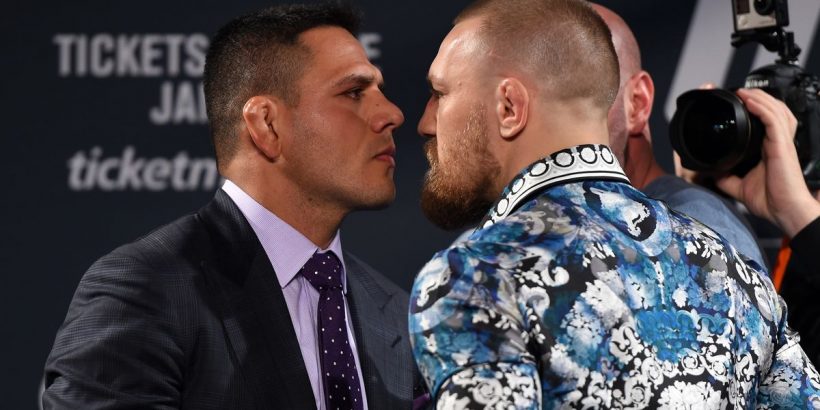 Rafael Dos Anjos has revealed he was unimpressed with Conor McGregor during his defeat to Dustin Poirier and is ready to "smash" him in a lightweight battle.

The Irishman was forced to retire injured after he suffered a broken leg in defeat by Poirier in Las Vegas at UFC 264.

Dos Anjos made weight ahead of the card as a potential replacement fight, but was ultimately not needed as the fight took place with McGregor losing although he is now poised to take his own shot at the 33-year-old.

“It would look way worse I think my ground game is way more powerful than Poirier’s, It would be way different," Dos Anjos told MMA Junkie Radio.

"It would be way different. Conor, he looked so sloppy, he looked so small. I met him at the weigh-in day and we had a small altercation in the back room and he looks so small.

"He looks like a little boy. I would smash that guy.”

The Brazilian had received surgery earlier in the year, after being out of action since his narrow split decision victory over Paul Felder at UFC Fight Night 182 back in December 2020.

He could have potentially fought McGregor at UFC 264 had Poirier pulled out – and the rivals were involved in a post weigh-in altercation.

“Even Friday at the weigh-ins, he said, ‘Hey, you ducked me with a sore foot," Dos Anjos continued.

"He said the same thing on Friday too, that Dustin Poirier would leave the cage on a stretcher, and look how things happened.

"He left on a stretcher with a broken foot. So, he getting his own thing. He’s tasting his own venom and his own medicine and that’s it.

Dos Anjos and McGregor have also previously missed the chance to face each other back in 2016, when the former UFC lightweight champion was forced to withdraw with a broken foot, paving the way for Nate Diaz to replace him at late notice.

McGregor has been linked to a range of opponents since his defeat to Poirier, with Paulie Malignaggi most recently offering him an 'all-or-nothing' contest after his recovery from injury.

But Dos Anjos refused to aim jibes at his lightweight rival, instead drawing focus to his own return to training.

Jake Paul has also forced his way into contention to face McGregor, after gifting Dustin Poirier a $100,000 chain mocking the Irishman after his second defeat to the American.

The former UFC lightweight double-champion will now likely face a period out of action, after being ruled out of fighting until August at the earliest with medical suspension.

Upon his return he could face a queue of potential opponents, with Jake Paul and Manny Pacquiao both recently linked of a potential bout in the boxing ring.