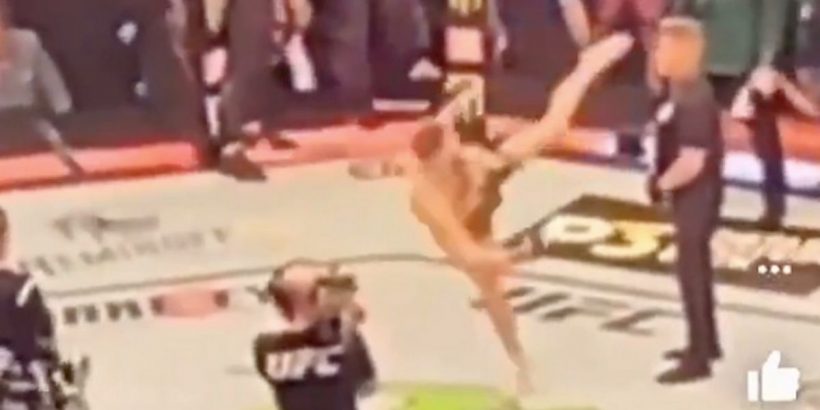 A security guard involved in the Conor McGregor and Dustin Poirier trilogy has gone viral after his reaction to a kick thrown by the Irishman was caught on camera.

McGregor made his way to the cage first in Saturday night's fight, meaning he had to wait in the cage while Poirier made his walk, and did a few warm-up exercises to stay in the mood.

But he almost ended up landing one of his famous head kicks on a security guard with a shot that would have made even the strongest-minded people flinch.

And fans are noting that the security guard remained ice cool as McGregor threw a head kick that he managed to stop just inches before hitting the guard.

The fight ultimately didn't go McGregor's way; he suffered a horror leg break that stopped the bout after just one round and gave the trilogy to Poirier.

McGregor was losing on all three judges scorecards, with two even marking it 10-8, but he has claimed that it was an "illegitimate victory" for Poirier.

And he has vowed to return to the octagon once he recovers from his injury, which will likely take until early next year at earliest.

"We got six weeks on a crutch now and then we begin to build back. I want to say thank you all the fans around the world for the messages of support, I hope you all enjoyed the show

"I want to thank all the fans in who came to the T-Mobile arena – 21,800 fans in attendance. The place was absolutely electric.

"It was a hell of a first round it would have been nice to get into that second round but it is what it is, that’s the nature of the business, it was a clean break of the tibia and it was not to be.

"Dustin you can celebrate that illegitimate win all you want but you done nothing in there.

"That second round would have shown all and onwards and upwards we go team, we dust ourselves off, we build ourselves back and we come back better than ever. Let’s go team."

McGregor's coach John Kavanagh also had a different assessment of the fight, telling fans on an Instagram Live stream that he felt the bout was going well, and that he was confident of a second round win.

“It was going fantastic,” he told fans in a promotional stream for his Wimp2Warrior program. “I thought he looked really, really good in there.

"I thought energy looked good, technique looked good – a few adjustments in between rounds, and I thought Round 2 we were well on track to getting a finish there, or keep the rhythm going for the rest of the fight.

“Credit to Dustin, he won, it’s an unfulfilling end to the night – it doesn’t feel properly finished, and there wasn't any closure.”