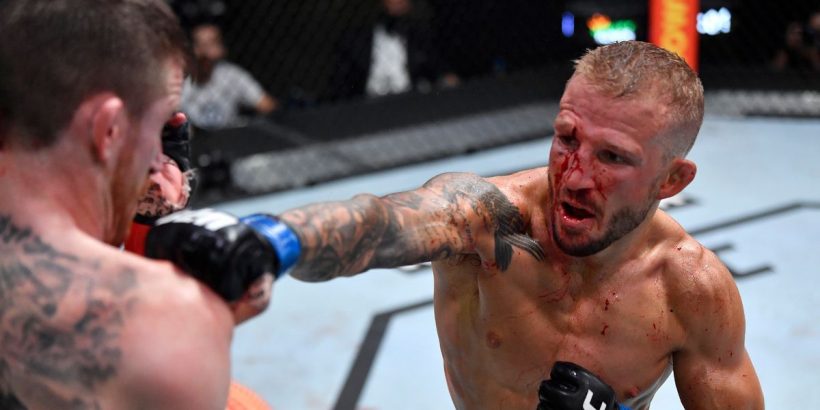 Urijah Faber thinks his former training partner TJ Dillashaw looked like the same fighter against Cory Sandhagen as he did before his two-year anti-doping suspension.

Dillashaw defeated the No.2-ranked bantamweight Sandhagen by a close split decision this past weekend at UFC Vegas 32. It was Dillashaw's first fight since a 32-second stoppage loss to Henry Cejudo in January 2019.

This is because Dillashaw later tested positive for the performance-enhancing drug erythropoietin (EPO). He was banned by the United States Anti-Doping Agency (USADA) for two years.

Faber, who trained with Dillashaw for many years at Team Alpha Male in California, thinks he hasn't changed in his two years away from the cage.

“He looked like the same guy. I mean, look, in the aftermath of having the guy on the team and then leaving the team and me always being dark on everything, I know a lot more stuff than most people do about the whole situation," Faber told Submission Radio.

"But the one thing I can say is, the reason he’s cheating is because he’s a competitor. Like, not a fair competitor. He’s a cheap-shot guy. But the guy’s whole intent and focus is to win.

"If someone’s a cheater because they don’t believe in themselves, that’s one thing. But if somebody does an actual assessment of what they need to gain. Whether it be conditioning or strength or whatnot, and then cheat because of that, there’s a big difference."

In his post-fight interview after defeating Sandhagen, Dillashaw called for a bantamweight title shot against the winner of Petr Yan vs Aljamain Sterling at UFC 267 on October 30.

Faber didn't delve into much detail regarding Dillashaw's use of illegal substances apart from touching on what the former bantamweight champion has already tested positive for.

“TJ’s pretty close with a lot of guys on the team, and I’ve just heard in the years after he’d been gone what had been going down and what not," he added.

“I was never privy to anything. All I can say is, he got caught for EPO, whatever it was. That’s all there’s proof of and I’ll just leave it at that.

“He knows. His family knows. Everybody knows what he was doing. It’s not my business to put anything out there. Other people have gone out and said stuff about whether he was or wasn’t."

Dillashaw has always competed at 135-pounds during his UFC career but made flyweight on one occasion for his fight with Cejudo. Continuing to discuss Dillashaw's PED usage, Faber added that his former teammate has always struggled to put on size.

"I know that he came to my team as a lifetime athlete who wrestled since he was a little kid and wrestled in college and worked out really, really hard and couldn’t bust 143 pounds, and he was complaining about it.”