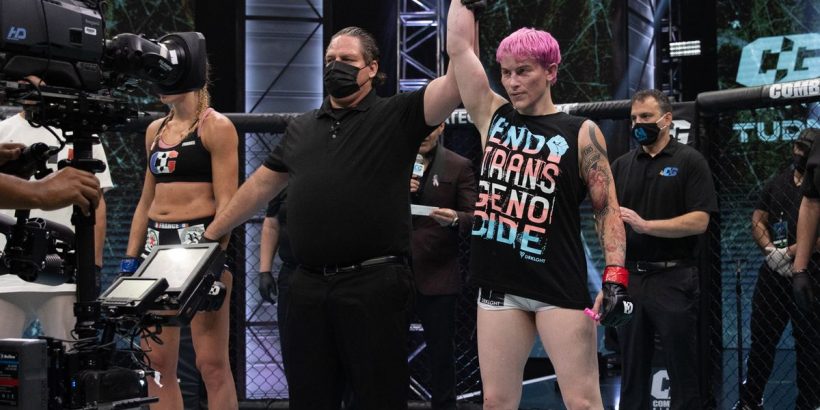 Transgender mixed martial arts fighter Alana McLaughlin made a successful start to her career by choking out her opponent in the second round last night.

McLaughlin, who was born a man, was the first openly-transgender MMA athlete to compete in the US since 2014.

And having been rocked by opponent Celine Provost in the first of three scheduled rounds, McLaughlin fought back the second session to submit Provost by rear-naked choke.

In stepping into the cage, McLaughlin, 38, became just the second transgender woman to compete in the sport, following in the footsteps of Fallon Fox who was cageside in Miami.

Fox had already fought twice when she came out as transgender in 2013 and went on to compete on another four occasions.

McLaughlin had passed a battery of medical tests before the fight, including hormone assessments, but feared her chance to compete had gone when Provost tested positive for Covid-19 in July, resulting in the postponing of their original August 6 date.

Before her bout, McLaughlin, a former member of the US Army Special Forces, said: “I want to pick up the mantle that Fallon put down.

"Right now, I’m following in Fallon’s footsteps. I’m just another step along the way and it’s my great hope that there are more to follow behind me.

Share your thoughts on McLaughlin's debut in the comments section below

McLaughlin had asked her mother for gender reassignment from a young age but, having grown up in a religious family, was denied and the pair no longer speak.

She went on to serve her country for six years and was awarded eight distinguished service medals but was later diagnosed with PTSD.

She only started training in MMA earlier this year having struggled to find a gym which would welcome here.