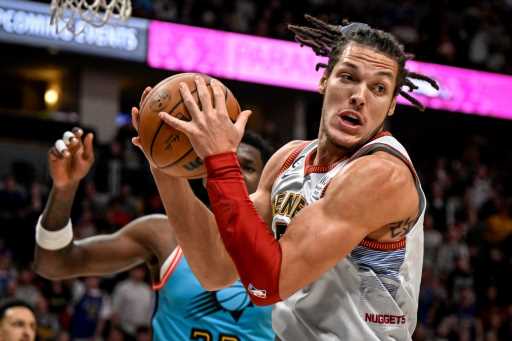 Not long after Aaron Gordon was traded to the Nuggets, Nikola Jokic needed to lay the groundwork for their partnership.

If Gordon was the piece then-president Tim Connelly had hand-picked to be his power forward, Jokic felt compelled to establish some expectations. Sure, Gordon’s athleticism was jarring and his defensive versatility broad enough to help protect Jokic in the paint. And, of course, Gordon’s playmaking in Orlando teased the boundaries Denver’s duo could discover. When you paired two ball-handling big men together, with a shared predisposition for creativity, the possibilities were endless.

But first, Jokic had to get Gordon to understand something.

The fadeaways — shots that were always going to be available, minimized the chances at an offensive rebound, and mitigated Gordon’s physical advantages — weren’t the shots the Nuggets were hunting.

Two seasons later, Gordon has largely excised those shots from his repertoire. He’s trimmed the fat out of his game to produce the most efficient season of his career.

Not only did Gordon heed Jokic’s advice regarding shot selection, but he’s also sacrificed his ego, shape-shifting to address whatever the Nuggets need on a given night. More than halfway through the season, his selflessness has yielded a campaign that could vault him to Salt Lake City for next month’s All-Star Game.

“Sometimes in the NBA, when you’re trying to prove yourself and you’re young, you think you have to do it with the ball all the time, and he’s so comfortable in his own skin right now, he does everything for somebody else,” acting Nuggets head coach David Adelman said. “He posts up smalls, gets somebody else a shot, runs the floor correctly, KCP gets a corner three, screens and rolls, brings the help, somebody else gets a shot. His game has become an extremely advanced, overall team player.”

How he arrived at that point was a bit more complicated.

In the aftermath of last season’s first-round ouster to Golden State, Gordon was uncomfortable with his performance. To escape, he went deep-sea fishing in Alaska, traveled to Morocco, bounced to South Africa, then explored France, Italy, and Prague.

“Trying to get away from that terrible, terrible series I had against the Warriors last year,” Gordon told The Denver Post in an upcoming Nuggets Ink podcast. “It was nasty.”

Amid his travels, the thoughtful 27-year-old came to realize that it didn’t matter how many places he visited. While Gordon prides himself on being a citizen of the world, he felt a nagging itch to get in the gym and work.

“The thing about your problems is that they’re faster than you are,” Gordon said.

Once he returned, Gordon was re-energized. Inside his personal gym, Gordon has banners hanging of legends like Michael Jordan and Kobe Bryant, groundbreakers like Muhammad Ali and Jackie Robinson, and entertainers like Jimi Hendrix and Lauryn Hill. When Gordon audited his game, poring over Synergy’s analytics to become more efficient near the rim, those were the luminaries who served as inspiration.

His current attitude marked a significant departure from where he was as a rookie: “I wanted to be the best in the world.”

But maturity, a change of scenery, and an understanding of whom he’d become as a basketball player changed his goals. He now says he’s competing against himself, a mantra he has etched on one of his signature shoes.

“He simplified his game,” Adelman said. “He’s too athletically gifted and skilled for it not to work out, but sometimes when you’re that gifted, you’re looking to be everything at once.”

Adelman praised Gordon’s effort in running the floor and lauded his spacing alongside Jokic. The 3-pointers he’s launched this season, at a career-high 38%, are quality shots, according to Adelman.

Near the midway point, Gordon’s averaging 16.8 points per game on a career-high 59% shooting. On two-pointers, that number skyrockets to almost 66%. By comparison, Jokic, as a center, shot that mark last year during his second MVP campaign. Compared to the standard-bearer at his position, LeBron James’ most efficient season inside the arc yielded a 62% clip.

Within Denver’s top-ranked offense, there’s a level of unselfishness that has defined their collective play.

Said Jokic recently: “I don’t have a problem with taking less shots.”

And when that’s the attitude of the reigning two-time MVP, “You have no right to be selfish at all,” Gordon said.

Gordon’s All-Star hopes are contingent on how opposing coaches view that approach. There are gaudier numbers within the Western Conference ranks, but Gordon’s case resides in how he’s impacted winning for the No. 1 team in the West while playing within himself.

“I’ve just put in years and years and years of work into this craft,” Gordon said. “(Receiving an All-Star bid) would be a beautiful accolade, but, at the end of the day, it’s about that (championship).”

Want more Nuggets news? Sign up for the Nuggets Insider to get all our NBA analysis.